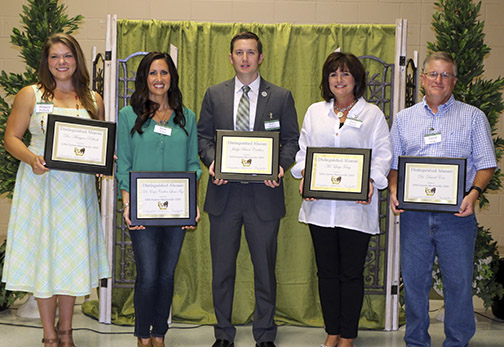 Recipients, family and friends attended a reception in their honor on Friday afternoon and they were introduced just prior to the football game later that evening. The District began the LCM Awards Program in 2012 to recognize those alumni, staff and community members through the “Distinguished Alumni” and “Hall of Fame” awards and the “Military Hall of Fame.”

The LCM “Distinguished Alumni Award” recognizes and honors graduates who have distinguished themselves in an exemplary manner, which brings honor and pride to the LCM District and community.  Demonstrated integrity and commitment to excellence by the alumni make him or her an inspiration and source of encouragement to all.

The purpose of the “Hall of Fame” is to recognize and honor individuals of the utmost character and integrity who have made an extraordinary impact on the District through service, support, financial contributions and/or influence.

The LCM District is proud to recognize and honor the men and women who have served our country in the military. The virtual “LCM Military Wall of Honor” is the District’s way of demonstrating respect, appreciation, and indebtedness for their service. Any active military personnel or honorably discharged veteran who is an alumni or employee of LCM CISD is eligible for this award.

Nominations for all categories are accepted throughout the year and applications can be found under the community tab of the LCM website, at www.lcmcisd.org, or by e-mailing scombs@lcmcisd.org.