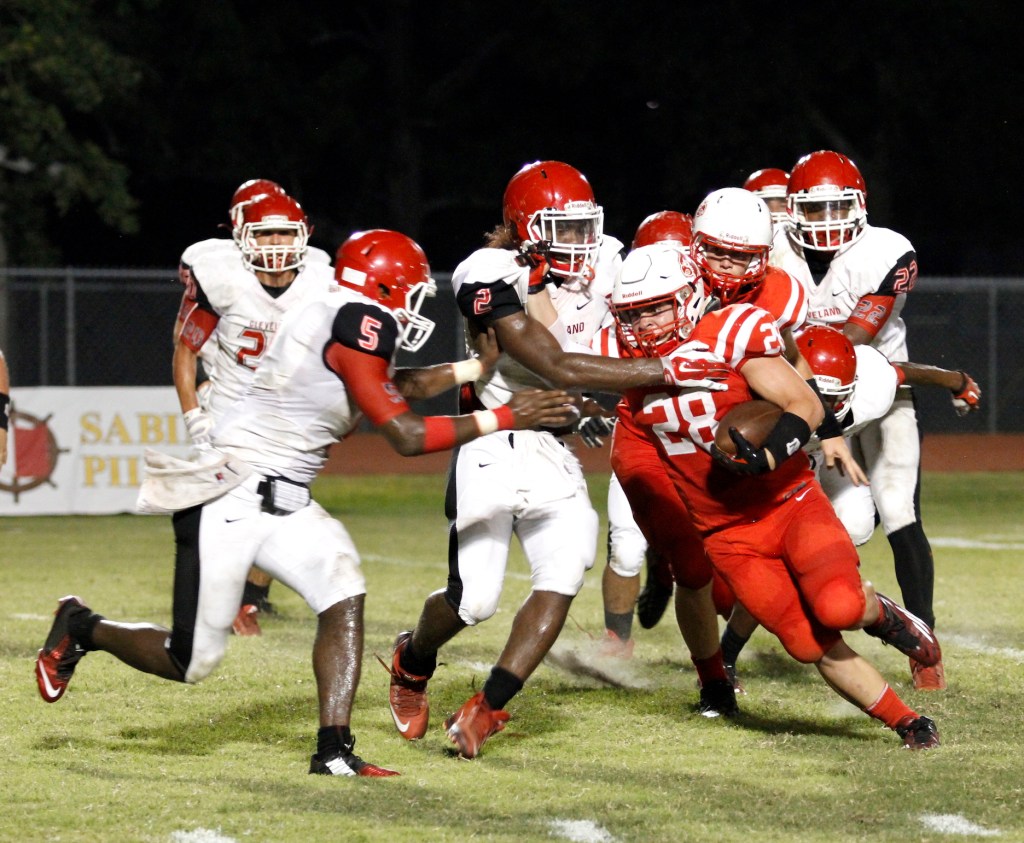 Bridge City's Cayce Draper (28) has his eye's on the goal line as a pack of Cleveland defenders finally drag him down just short of the end zone. (Troy Jones / The Orange Leader)

BRIDGE CITY – It wasn’t pretty, but it was a win.

On a night when fumbles, penalties and a porous defense nearly spelled doom for Bridge City, the Cardinals were happy to escape with a 42-35 win over District 10-4A, Division I foe Cleveland on Friday night at Larry B. Ward Stadium.

“If you had told me they would have scored 35 on us tonight, I wouldn’t have believe you,” Bridge City coach Dwayne DuBois said after the narrow victory over the winless Indians. “You can never underestimate anyone, especially in district play. We were fortunate to get out of here with a win tonight.”

The win, which improves the Cardinals to 4-1 overall and 1-0 in league play, was a hard-fought battle that really wasn’t in hand until late in the fourth quarter. Quarterback Camden DuBois added an insurance touchdown with 4:14 left in the game, putting the Cards up by two TDs, 42-28.

But, much as the game had gone before, the Cards felt the heat of Cleveland adding another TD with just under a minute left on a fluke-ish play in the end zone. On fourth down, Cleveland QB D.D. Jackson hurled a pass into the end zone which was pulled down by a BC defender. Before he could pull the ball in for the touchback, Leroy Scott wrestled the ball away for a Cleveland touchdown and a one score deficit.

Fortunate for Bridge City, the ensuing onside kick by the Indians was unsuccessful and the Cards held on for the win.

And while the defense struggled from opening kickoff to the final horn, the offense experienced its difficulties early, giving away possession twice on fumbled balls.

After taking the opening kickoff, the Cardinals managed just three plays before coughing up the ball. The defense held and forced Cleveland to turn the ball over on downs.

The first play from scrimmage for the Cardinals on the ensuing possession saw another fumble, though it was recovered by BC. After that, spurred by a 54-yard run by Colt Poole, the Cards moved down the field, capped by a 3-yard TD run by Cayce Draper.

Cleveland answered, scoring a TD on a 26-yard pass by Jackson to Jaylon Williams to knot the game at 7-7.

Bridge City’s offense went to work, moving 79 yards in just four plays to retake the lead. DuBois had a 25-yard run, completed a 39-yard pass to Brody McBee, then carried the ball the final six yards for the 14-7 advantage.

Cleveland was forced to punt on its next possession and it looked like the Cardinals were ready for the runaway. On the first play after the punt, another fumble and Cleveland was in business again. Or so it seemed.

Thanks to a great defensive read by Hunter Denton, he was able to pick off the Cleveland pass and return it to the Indians’ 35 yard line. The next drive took eight plays but DuBois managed to get in from the 1 for a 21-7 lead with 7:50 remaining in the first half.

Cleveland opened the second half with a nine-play, 53-yard drive that ended with Jackson rolling in from the 10 yard line, cutting the BC lead to 21-14.

After the two teams traded punts, the Cards were able to get on the board again, thanks in great part to a great return by BC back to the Cleveland 11.

A Bridge City penalty, one of 10 that resulted in 90 lost yards, had potentially threatened another scoring opportunity. But Draper ran the ball twice and got into the end zone from 5 yards out to bring the score to 28-14.

Just as quickly, Cleveland was on the hunt again with Sam Alvarado going 67 yards the first time he ran the ball, getting into the end zone for a 28-21 difference.

The Cardinals cranked off a 13-play drive that killed more than four minutes off the fourth-quarter clock. Derick Dearing, who has found his success mostly on defense this season, scored his first TD of the year on a 7-yard run and the Cards were up 35-21. 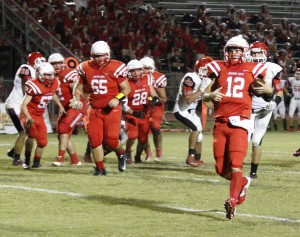