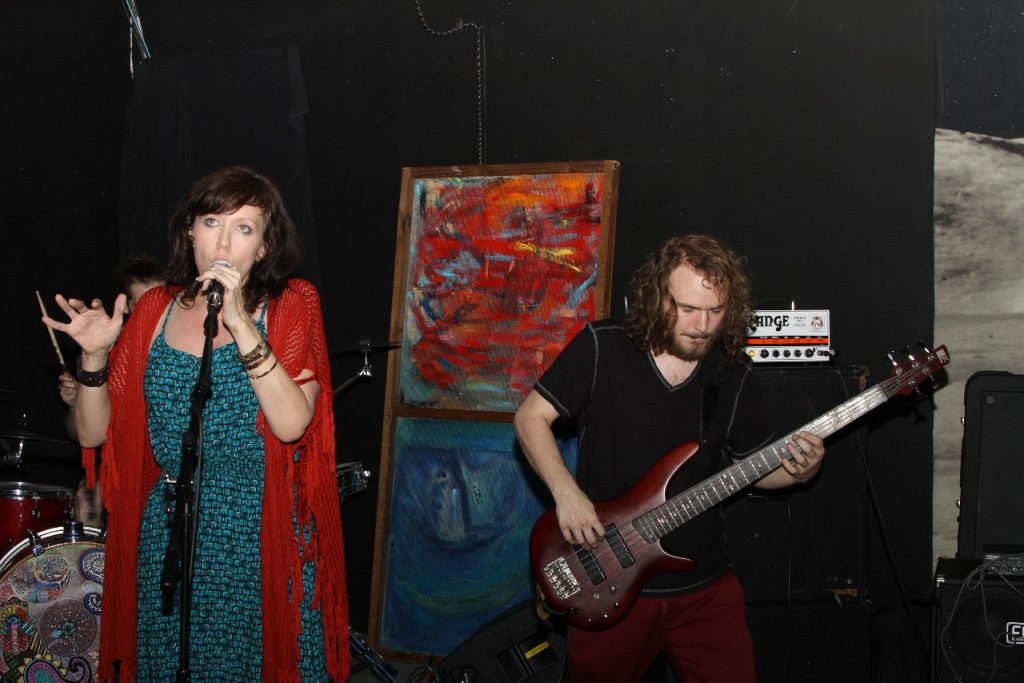 The “Goddesses Rock Show” on Saturday at The Gig in Beaumont will feature four local and regional bands, each featuring a female-fronted group. Boxing Dei Dei is from Orange County and features vocalist “Razz” Melinda Abrego, at left. Also pictured is bassist Jimmy Womack. (Tommy Mann Jr. / The Orange Leader)

The world of music has long been dominated by men, but that has been changing for many years. The same could be said for the local scene, but that has changed as well.

Four bands will join forces for a concert this Saturday night in downtown Beaumont for the “Goddesses Rock Show” at The Gig. Admission is charged at the door for ages 18 and older.

Each group on the lineup features a female vocalist. Bands scheduled to participate include Boxing Dei Dei, from Orange County, Creeping Phlox, from Beaumont, Only Beast, from Houston, and Autumn Stay, from Waco.

“I truly enjoy each band on the bill, and that doesn’t happen often,” Abrego said with a laugh. “Autumn Stay is heavy, like in a hard rock way, while Creeping Phlox is heavy, but with a Janis Joplin-kind of vibe at times, if that makes sense. And Only Beast is really interesting. Their guitarist has this set-up where he uses his feet to play bass or whatever else they need in the song. It looks like he is running in place, but it’s amazing.”

Abrego said females are no longer considered an oddity in the world of music. Five years ago, one would have been hard pressed to find two groups with female members, but now there are as many as 10 bands in the local area with female members.

“It’s not like you see it everywhere, especially in this area, but it is not uncommon to see other bands with females,” she continued. “You are a product of your environment. Some people do not take female musicians seriously. Some guys may talk trash, but that happens everywhere. For the most part, I think people just see us as a part of the band instead of a girl in a band.”

Boxing Dei Dei, which has gone through its share of roster changes, has been part of the local music scene for several years. The group was commonly associated with the hard rock and metal community, but, following a significant shift in the lineup in 2014, the group appears to have found its niche with a new sound that fits more into the pop, alternative realm.

“I love ’90s rock and alternative rock so much,” Abrego explained. “Those vocalists from that era are some of my favorites. Before, we played a lot of shows with the hard rock and metal bands. It was fun, but we never quite fit in. Maybe it was just the wrong audience. Now, we are more like alternative-pop rock and it is so much more fun.”

Abrego believes this show will appeal to fans of many music types, even people who do not often see local bands perform.

“I think this is the type of concert which will surprise some people,” she said. “Each band is really good at what they do, and none sound like any of the others. You get something different, without it being totally different styles like country or metal. It’s going to be a fun night.”

The doors at The Gig, located on Crockett Street in Beaumont, open at 8 p.m., Saturday, Sept. 26, with the show starting quickly thereafter. For more information on this band, search Boxing Dei Dei on Facebook.

Entertainment for the week of Sept. 23 – Sept.…