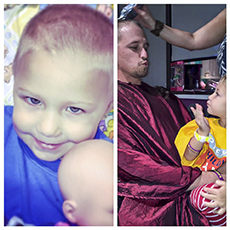 Courtesy photo Austyn Halter, left, 2, is undergoing inpatient treatments in Houston for Acute Myeloid Leukemia, a rare form of cancer. Right: Josh Halter and Austyn Halter blow each other kisses while Josh has his haircut to match his daughter, Austyn. Austyn recently completed her first round of chemotherapy and faces four more rounds as she battles a rare form of cancer.

ORANGE — A bright eyed, beautiful Austyn Halter, 2, loves playing with baby dolls and ballet recently completed her first round of chemotherapy as she battles a rare form of cancer.

Austyn, of Orangefield, was diagnosed with Acute Myeloid Leukemia (AML-M7), a form of cancer so rare Texas Children’s Hospital, Houston, only treats one case every three years according to Sarah Halter, Austyn’s mother.

“She may need a bone marrow transplant,” Sarah said during a phone interview. “We are taking classes now to prepare us.”

Sarah said Austyn is her and her husband’s, Josh, whole world.

“She is our little princess,” Sarah said. “She is our whole world and our world has turned upside down since this has happened.”

Sarah was a nurse in Labor and Delivery at St. Mary’s hospital prior to the consolidation of the St. Christus Hospital system. A friend of the family said the day Sarah was to start at St. Elizabeth Hospital is the day the family was sent to Houston due to Austyn’s diagnosis. Josh Halter has since left his position as supervisor with RCI due to the six-month inpatient treatment Austyn is undergoing to battle Leukemia.

“Most of the time is recovering from the chemo,” Sarah said. “We have to get her numbers back up and be careful because she is at risk for infections.”

Having a background in the medical field has not made the situation easier for Sarah.

“I know a little too much,” Sarah said. “We only touch on oncology in school and now I know more than I ever wanted to know about it.”

Josh Halter describes Austyn as their ray of sunshine.

“She is everything to us,” Josh said. “Everything is built around her.”

A Bass Fishing Tournament is being held 6:30 a.m. – 3 p.m. Sunday, Sept. 27 on the Sabine River at the City of Orange Boat Ramp. One may pre-register at Simon Outfitters, 2674 Mac Arthur Drive, West Orange, or register the morning of the event prior to launch.