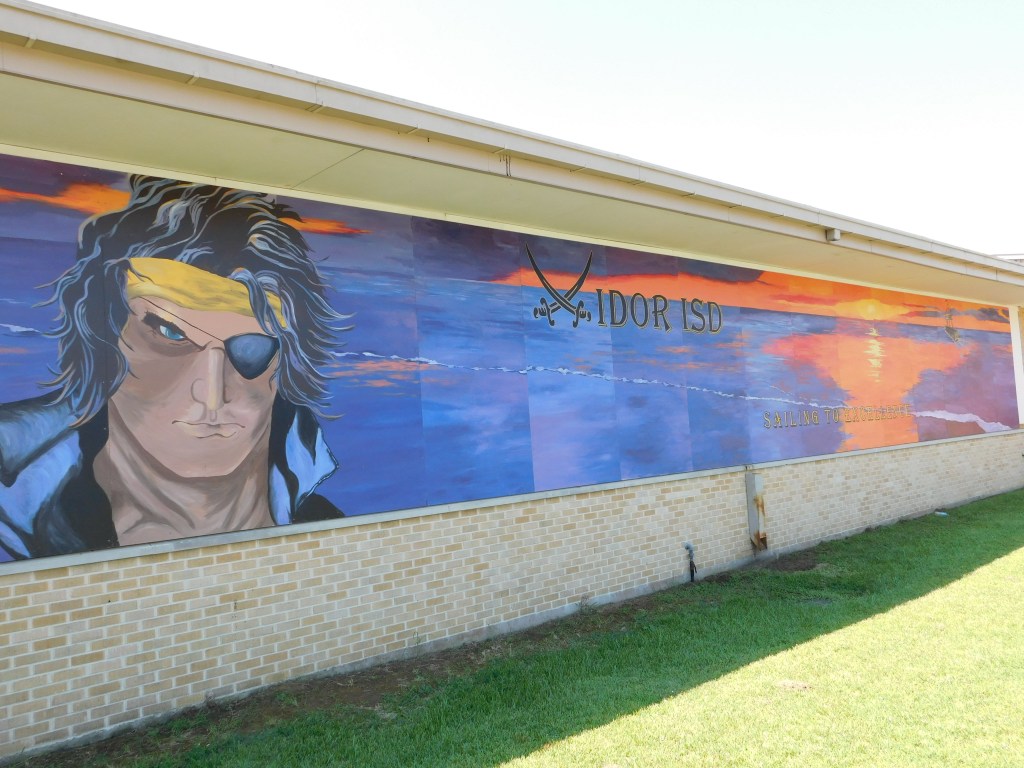 Courtesy photo Beautiful artwork can be found on the campus of Vidor High School thanks to several students and teacher who created a large Pirate Mural on the campus.

Vidor High School is sporting a beautiful new mural, thanks to a collaborative effort among quite an impressive number of people. The idea was the brainchild of principal Travis Maines, who asked art teacher Suzanne Simmons over a year ago about painting something on the empty third wing brick wall, which is close to the VHS auditorium. Maines said he and Simmons were discussing a project that the students could work on, and he told her he’d really like a big mural on the 300 building next to the courtyard. “I really expected something extremely simple, like maybe the logo in black and white. What Ms. Simmons and her students did far exceeded my expectations. It’s amazing, and I can’t wait to see the reactions of people who see it for the first time. I am so proud of it.”

Ms. Simmons spent a whole summer thinking about what the mural should look like and the best way to accomplish painting something that would ultimately be eight feet tall and sixty-four feet long. “It’s not easy when you have a long space like that,” said Simmons. “I spent months brainstorming and trying to decide how the mural should look. I knew it needed to be pretty simple, and that it also needed to include the VISD logo, but I couldn’t decide where to go from there.”

When the ideas finally gelled, she and her students were ready to roll. They purchased sections of board. She met with Mr. Ronnie Davis, head of Vidor ISD Maintenance, and he advised her on the best way to prime the boards so they would be weatherproof. He even talked to her about the kind of paints she should use to make sure the mural would endure our Southeast Texas climate.

She and her students set to work painting the sixteen boards, taking on the daunting task of being sure the picture was a cohesive unit. All of her classes, including about 130 students in all, worked on the project. Sometimes the large sections of board were stretched out over tables in her classroom, and sometimes they were standing up in the hallway. “We had to continually place them side by side so we could be sure the waves were matching as we traveled from one board to the next painting,” said Simmons. “It wasn’t always easy to paint on a large board that’s on a table. So we had to discuss how we paint from the background into the foreground and how the colors needed to flow into one another.  I guess the students all had to learn to paint like me so we would have cohesion in the project.”

The pirate and the ship were painted freehand, as was the sky and water, but the letters were stenciled on. “That was a lot of work!” says Simmons, “And it definitely wasn’t the most fun part!” Student Cade Purcell, then in only his first year of high school, did most of the work on the Pirate ship. “He has amazing talent,” said Ms. Simmons.  “When I asked him to paint the ship, he didn’t hesitate. He did a beautiful job.”

Simmons designed the pirate herself.  She didn’t want to use any of the pirate heads that are already used in Vidor ISD.  “I wanted our pirate to look more like an Avengers character, more handsome but still tough-looking.”  She succeeded, and applied the final touches in mid-June.  The mural was recently hung and will greet visitors attending programs in the Vidor High School auditorium.  In fact, it’s up in time for the Back to School convocation next week, and Simmons and principal Maines can’t wait to see the reaction of the staff, then the students as they head back to school.  “It was a hard task,” she says, “but I’m pleased with the results.”

Simmons’ art students will also participate in Arts Afternoon, to be held on Friday, Sept. 18 at the Vidor ISD annex, across from the post office. The event will feature artwork and music by VHS students, and is open to the public and free of charge.