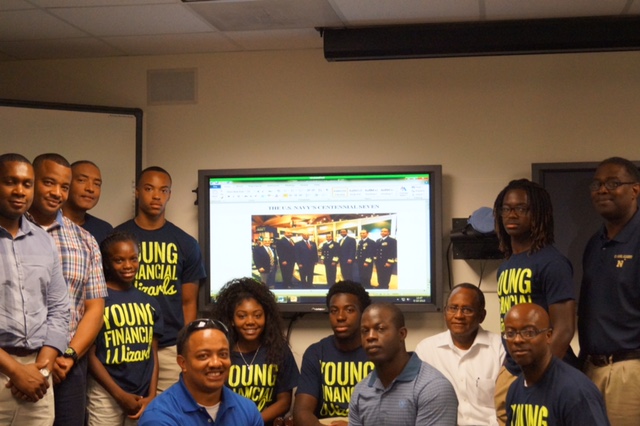 “It was an eye-opening experience,” Ivory said. “It was a great experience. I feel it will set me up for success later in life.”

The organization took several years to bring together according to founder Ivory Roberts, originally of Orange and now residing in Houston.

Roberts noticed, while working in finances, there was a trend in how clients traded currencies.

“Clients in the $100,000 range financial plan would include their children,” Roberts said. “They would bring the kids to the meetings.”

According to the National Center for Law and Economic Justice, 46.5 million people live in poverty in America in 2012. The NCLEJ also reports “racial and ethnic minorities, women, children, and families headed by single women are particularly vulnerable to poverty.” At Young Financial Wizards, Inc., we believe we can help reduce this dire statistic by teaching young people how to save money and invest in their future. Our five-year program has been designed to work with each student beginning in 7th grade throughout high school. Students learn how to save money and how to make sound investments that will grow and build wealth over time, according tor the Young Financial Wizards, Inc. Facebook page.

“It took five and a half years to bring everything together for the organization,” Roberts said. “I have been involved in sponsoring the trips for eight years, the last two years have been through the organization.”

The organization is already making history as Roberts is the first to take a group two years in a row on a tour of the Wall Street Stock Exchange without being a CEO for a fortune 500 company.

Roberts reached out to students in his hometown of Orange for the most recent trip in August.

“I wanted to bring a group from Orange,” Roberts said. “Paul made such a great impression.”

As a result of Paul Ivory II, he and a group of up to ten youths have been invited to Naples, Italy.

Georgia Noone-Sherrod, whom Ivory met during the trip, contacted her brother via email concerning Ivory and his goal to become a Nuclear Engineer. The exchange led to the invitation to Italy.

The trip is not the only experience the students experience as they the Pentagon, The White House, The Capitol Building, George Washington University, Howard University and The US Naval Academy.

“This is a once in a life time opportunity for these kids,” Roberts said. “It is not just about the trip, there is also community service involved. The students on this trip wrote a children’s book based on the trip. We are able to give them different opportunities which will reflect on their applications.”