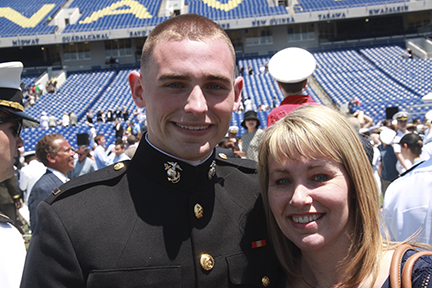 Courtesy photo Second Lieutenant Zachary Blanchard graduated from the United States Naval Academy in Annapolis, Maryland this past May with his mom, Dawn Moore, a teacher at Mauriceville Elementary.

Zachary Jordan Blanchard, a 2011 graduate of Little Cypress-Mauriceville High school, graduated from the United States Naval Academy in Annapolis, Maryland this past May and was commissioned into the United States Marine Corps as a Second Lieutenant.

Zach’s career at the Naval Academy in many ways mirrored his career at LC-M, where he graduated fifth in his class, excelling academically, athletically and in leadership.

Zach graduated 41st in the 2015 USNA class of 1141 midshipmen from all 50 states and numerous foreign countries.   He was a double major in aerospace engineering and political science. This fall he will be attending Cambridge University in the United Kingdom where he will begin studies towards a Master’s degree in International Relations, with special interest in local governments in East Africa.

Zach’s success is not surprising to one of his former teachers at LC-M. Jane Dunn, Zach’s 10th grade chemistry teacher said,  “He was just a nice kid and stood out among the others. Zach was always a confident kid and always knew ‘who he was’. He was not a nerd, either”, she said with a laugh.

“Of all the kids I’ve ever taught at LC-M or at the college level, Zach is at the very top. He was such a well rounded kid….and as cute as he could be!  He was a special kid, even then!”

At LCM Zach was an All-District performer as a football and soccer player and was selected to the All-Regional choir.

At the Naval Academy he sang in the nationally known Men’s Glee Club. During his senior year, his peers elected him president of the club. Zach participated in Sprint Football, an NCAA sanctioned football conference where each player must weigh less than 172 pounds. He was selected Honorable Mention as a defensive end after his sophomore and junior campaigns. Moving to offensive tackle his senior year, he won first team All Conference honors. During his last two years at the Naval Academy, the Sprint team only lost one game and went undefeated his senior year, winning the league championship.

During the summer prior to his senior year, Zach was selected one of 15 rising seniors to be a company commander of the incoming freshmen, or Plebes, as they are called at the Naval Academy. As company commander of a group of 80 incoming Plebes and was responsible for planning and implementing their introductory program. Plebes are taught Naval Academy procedures, military skills and are prepared physically to handle the challenges of being a Naval Academy midshipman.

Zach’s academic excellence continued at the same time. Each senior midshipman is required to spend a semester of his or her senior year working on a research project. Zach’s “capstone” project was selected top project among 120 within the political science department.

Following graduation and prior to leaving for the United Kingdom, Zach was assigned to the James B. Stockdale Center for Ethical Studies housed at the Naval Academy. There he visited Kenya to further his interest in international organizations and local governments in East Africa.

Marine Corps Major Daniel Goff, one of Zach’s advisors at the Stockdale Center, calls Zach, “an exceptionally bright and articulate young man.” In his dealings with Zach, Major Goff said Zach is willing to question how things are done the way they are in the military and why they are done that way. Major Goff believes that is something that is much needed from military leaders of the future.

Zach’s peers are also impressed with his success.

“I always joke with Zach that I only see him once per month”, said Ross Gilchriest, a Sprint football teammate and 2013 graduate of Silsbee High School, joking about Zach’s daily schedule. “But those rare moments are the ones I look forward to the most. Zach has an aura about him that makes others ask more of themselves—a sort of intellectual magnetism.

“If anyone can solve problems in Africa, it’s Zach. Well, maybe that’s ambitious to say, but I know he is driven enough to change whatever he puts his mind to.

“Of all the people I know continuing on to graduate school, I think Zach Blanchard deserves the opportunity most,” said Gilchriest, himself a high ranking student at the Naval Academy.

Zach is the son of Dawn Moore, a teacher at Mauriceville Elementary, and resident of Vinton, La. and Mark Blanchard of Dayton, Texas. Zach’s brother, Cameron, is a senior at Little Cypress-Mauriceville High School this year. Zach also has two younger brothers, Eli and Max, who live in Dayton with Mark and his wife, Ann.

Zach is the grandson of the late Tot Moore and Georgie Moore, who continues to live in Vinton. His paternal grandparents were the late Preston Blanchard and Dianne Blanchard, of Hackberry, La.

After spending the next year at Cambridge University, Zach will head to Quantico, Virginia where he will begin his career as a Marine Corps officer.