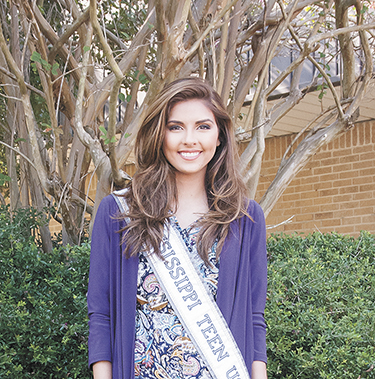 Dawn Burleigh/The Orange Leader Andrea Hightower, Miss Mississippi Teen USA, stops by The Orange Leader office before heading to the Bahamas to compete in Miss Teen USA. The pageant will be held on August 22 and 23, 2015.

“I have modeled for about three years,” Andrea Hightower said. “I became interested in it after a band fund-raiser called Beauty Review.”

Hightower explained the fund-raiser as a school pageant where she was able to achieve second runner up in sales the first year and first in ad sales her second year.

“It was a chance to get dressed up as a freshman,” Hightower said. “The director of the high school pageant encouraged me to pursue pageants.”

Once she had a platform, she began entering pageants.

The issue she chose to speak is mental illness.

“There is a need for more education and screenings at school for mental illness,” Hightower said. “We need to get rid of the stigmatizing of metal illness. If one says they are seeing a psychiatrist, people freak, but if one says they are going to the doctor, people are OK.”

Hightower has seen firsthand mental illness as her father self-medicated prior to diagnoses of Bi-Polar.

While Hightower has had several classes to learn how to speak and walk as a model, the Miss Teen USA organization has requirements for education.

“I attend an on-line school in Mississippi,” Hightower said. “The pageants do not delay school. A high school diploma must be achieved.“

Hightower has already received scholarships for Lindenwood University and if she is selected Saturday as Miss Teen USA, she will attend NY Film Academy for one year.

“She was taught how to be able to speak, to be interviewed,” Minnie Hightower, Andrea Hightower’s mother, said. “I have seen her speak with the governor of Mississippi and be just as comfortable as when she is speaking with the football players at Ole Miss.”

While the road to the main competition has not been easy, Andrea Hightower said she is grateful for her mother and her sponsors.

“Being raised by a single parent on a tight budget left very little for classes and trips for the pageants,” Hightower said. “It has all been worth it. I have gained friendships like family. The bond is so string it is as if I gained 51 bride’s maids.”

Andrea Hightower will compete for Miss Teen USA, August 22 and 23 in the Bahamas.