Styx stays the course for love of rock ’n roll 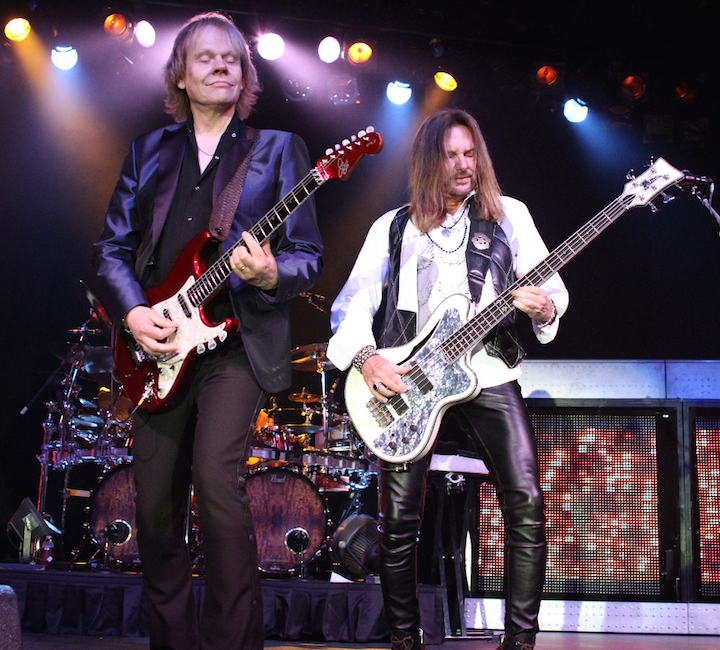 Styx, which features members James “J.Y.” Young, at left, and Ricky Phillips, returns to the Houston area on Saturday, Aug. 22, as the co-headliner of the hottest tour of the summer with Def Leppard. The bands will perform at the Cynthia Woods Mitchell Pavilion in Spring with opening act Tesla. (Tommy Mann Jr. / The Orange Leader)

The hottest tour of the season is one most may not have suspected but is one which has been consistently selling out across the country this summer.

Def Leppard and Styx bring the one of the most popular tours of the summer to Texas this week and arrive in Spring for a performance at the Cynthia Woods Mitchell Pavilion on Saturday, Aug. 22. Opening the show is well known rockers Tesla. Tickets are on sale now at all Ticketmaster outlets, online at Ticketmaster.com and charge by phone at 800-745-3000.

Although the tour may not seem like a perfect match on paper, in reality it has been one of the hottest tickets of the summer. Just ask Styx bassist Ricky Phillips.

“The tour has been just great,” Phillips said in a telephone interview. “This tour is selling lots of tickets and selling out lots of venues. There are a lot of great tours out there this summer, but this has been a sleeper tour, you know, kind of flying under most peoples radar.

“We’ve had great crowds, and the weather has even been great at most shows,” he continued. “Tesla rocks, plain and simple, Def Leppard is just amazing. It’s one hell of a show.”

Although Styx is not currently in support of a new studio album, the Styx-faithful have no complaints as the band is one of the most road-hardened outfits in the world. Despite more than 40 years as a rock act with several popular songs such as “Renegade,” “Blue Collar Man,” “Too Much Time on My Hands,” “Crystal Ball” and others, Styx still enjoys being on the road.

“We are on the road over 200 days a year,” Phillips added with a laugh. “We see each other more than we do our families, but it’s fun. It’s a full on lifestyle and we all enjoy it so much.”

The summer tour may vary from a traditional Styx headlining concert slightly, but Phillips said the band never cuts corners or gives less just because it shares the stage with other bands.

“There is some respect for what we do and respect put into the presentation of a Styx rock show,” he explained. “We could go out there in T-shirts and jeans, but that’s not how we do it. We like to give the fans a show. Some venues may not allow for a full stage production, but the majority of venues on this summer tour do and it’s just amazing. The production has just been outstanding with lights and staging, and the fans have been loving it and all of the bands.”

Phillips, along with his bandmates Tommy Shaw, James “J.Y.” Young, Lawrence Gowan and Todd Sucherman, will continue to tour through the rest of the summer before concluding its run with Def Leppard on Oct. 4 in Bismarck, ND. The band will continue with its own run of dates leading into Thanksgiving.

“We just enjoy being on the road and playing music for the fans,” Phillips explained. “This has been a great tour this summer and it’s not over yet. We are only half-way done and still have a lot of shows left to do. And we can’t wait.”

Visit www.styxworld.com for more information on the band and its upcoming schedule.