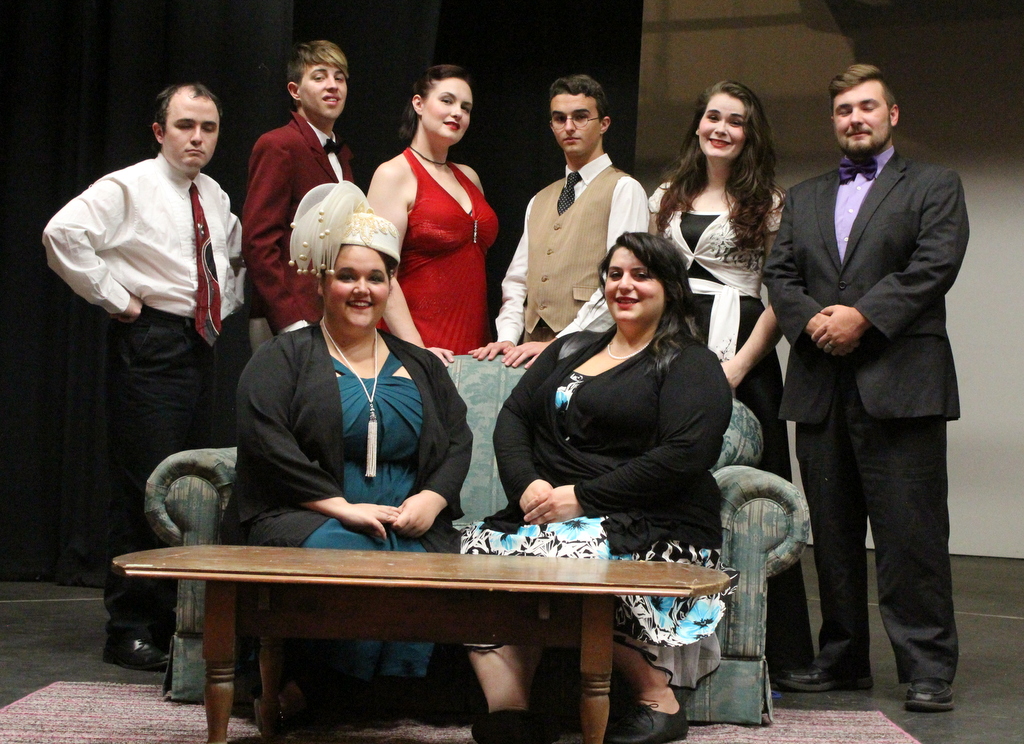 The Orange Community Players production of “Lend Me a Tenor” is a laugh-out loud evening of fun. Tickets are $10-$15 at the door. (Courtesy photo)

The Orange Community Players’ newest production, “Lend Me A Tenor,” hits all the right notes. The play, by Ken Ludwig, has been on Broadway off and on since the 80’s and has had nine Tony Award nominations. You can call it slapstick, a farce, or just plain funny. Whatever, you will laugh your way through it.

The scene takes place in a plush hotel in 1934 Cleveland where the local opera company has recruited a famous Italian tenor to perform Verdi’s “Otello.” What follows is a madcap series of events involving the tenor accidentally partaking of a double dose of a sedative mixed with wine. He is mistaken for dead and the opera company’s manager decides to make his nervous assistant, an aspiring opera singer, dress up as the tenor in dark makeup and in costume. With thousands of charitable dollars on the line, he performs to a discerning auditorium full of well-heeled patrons. The real tenor wakes up and dresses up as Otello also. This screwball comedy then has mistaken identities, witty repartee, zinging one-liners, and an impressive display of door slamming that keeps the characters darting in and out of hallways, closets, and bathrooms. The audience is following along and laughing.

The actors do superb jobs and there is not a weak one in the bunch. Bryan Buzbee, as Max, the anxious company assistant, demonstrates his hefty stage experience and brings his meek character to life with his fidgeting hands and nervousness. He plays Max’s discovery of the “lifeless” body with the macabre humor the scene demands. Great job, Bryan!

Rico Vasquez doubles as the director and as a lead actor with aplomb and professionalism. He portrays the tenor, Tito, with admirable balance between artistic hubris and genuine warmth while dealing with the utter confusion he faces with the zany characters. Rico always steals any show he is in. Bravo, Rico!

The high-strung opera company manager, Saunders, is played by Joey Nortman with snarkiness and frenzy. He has to yell most of his lines because none of the characters seem to pay much attention to his histrionics. Joey brings his character to life exceptionally well and has great stage presence.

The hotel’s persistent bellhop is a hoot, assertively portrayed by OCP newcomer, Jacob McMullin. We hope to see more of him in the future.

Max’s girlfriend, and Saunders’ daughter, Maggie, is sweetly played by Aimee McNeil. Though only seventeen, she has been involved in theater for seven years. As Maggie, she demonstrates both the naivete and flirtatiousness needed to keep her character charming and likeable.

Nikki Burch is appropriately feisty as Tito’s long suffering wife Maria. Amber Martin is a scream as the prissy chairperson of the Opera Guild. She often looks like a bird taking flight in her 1930’s costume with feathered boa. And last but not least, is Jona Gilchrist as Diana as the seductive soprano. All of these ladies are terrific!

The set is interesting as it is halved with the hotel suite’s sitting area in one half and the bedroom in the other half. The audience can see action in both areas at the same time. Combining a great plot, fun characters, and zippy direction, “Lend Me a Tenor” is a gem of a play. Prepare yourself to laugh-out-loud throughout.