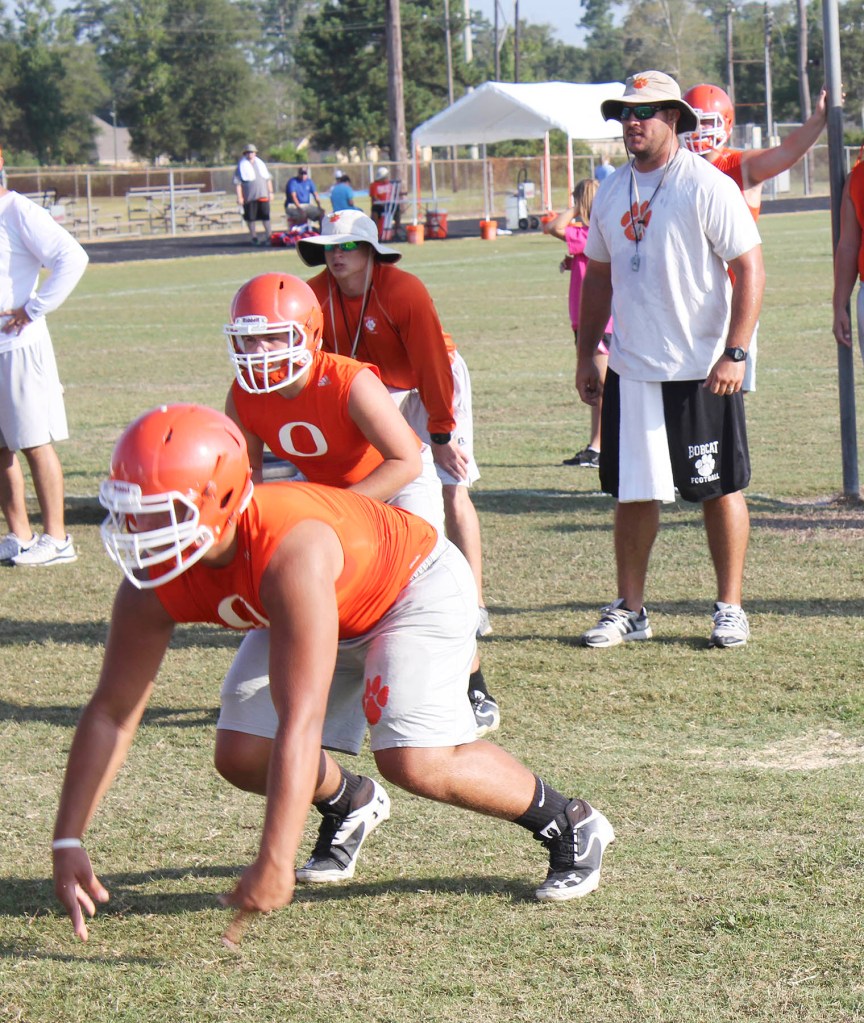 ORANGEFIELD — It was all about beating the heat for the Orangefield Bobcats this week as they opened football practice and they pretty much passed with flying colors for fourth-year head coach Josh Smalley.

“The summer was good for us,” said Smalley. “In the four years we’ve been here, this is the best shape the kids have ever been in as far as starting practice goes. They really dedicated themselves to get in better condition and stronger. I think that has a lot to do with us making it to the second round of the playoffs last year and the kids were really anticipating getting out here on Monday and workouts have been good.”

In 2014, the Bobcats clawed their way to their first playoff win since 2003 by outgunning the Houston Kashmere Rams 49-35 in the bidistrict round of the Class 4A Division II playoffs before bowing out to highly-ranked LaGrange in the area round.

This year, Coach Josh Smalley will try to lead his troops to a third consecutive trip to the postseason and even deeper into the playoffs.

The Bobcats will enter the 2015 campaign with four starters back on offense and five on defense and have a total of 15 returning lettermen off last year’s 7-5 unit.

The Bobcats will have to replace a pair of explosive offensive weapons to say the least to get their vaunted Slot-T, Wing-T formation going once again.

“This group is going to be excited to coach,” said Smalley. “This will be the seventh year that we’ve been in this offense and it will be the third year for this defensive style. The kids know what to expect and they pretty much know how we want to execute and that’s a big plus.”

The Bobcats had pretty good numbers out. There is a little more than 80 players out for football.

“Our numbers are okay,” said Smalley. “We’ve got a freshman class with over 30 players out, which is good. We have a small sophomore group again so we’re concerned again about how far our JV program can go because we’re spread a little thin there. All-in-all, we’re pleased with the turnout and we could get a few more come in late before it’s all over.”

The Bobcats will host Vidor in a scrimmage Aug. 14 and will visit Little Cypress-Mauriceville Aug. 20.

The Bobcats’ non-district schedule is more favorable this year with more home games.

After dropping two close games on the road at Buna and Kirbyville last year, the Bobcats will open those two games against those two squads at home on Aug. 28 and Sept. 4.

That will be followed by a visit to Beaumont Kelly (Sept. 11), a home date with Lumberton (Sept. 18) and then a trip to Newton (Sept. 25). All Bobcat fans should remember the Bobcats’ dramatic 25-20 home win over the Eagles last year. Newton did not lose another game until the Eagles reached the Class 3A Division II State Championship Game. The Bobcats close out their non-district slate by hosting Houston Worthing (Oct. 2).

The Bobcats will look to improve on their 2-2 District 9-4A Division II mark from 2014 when they open district play Oct. 9 at home against Hardin-Jefferson. They visit district favorite and 4A Division II state runnerup West Orange-Stark Oct. 16 and will host Liberty Oct. 23.

Orangefield has its open date Oct. 23 before wrapping up the regular season Nov. 6 at Hamshire-Fannett.

“We were so proud to advance to that second round last year because it had been so long,” said Smalley. “The kids are hungry for more now. It’s no longer about just making it in, it’s about going deeper and competing for the district title. We want to be in the hunt year-in and year-out.

Mustangs getting through first week