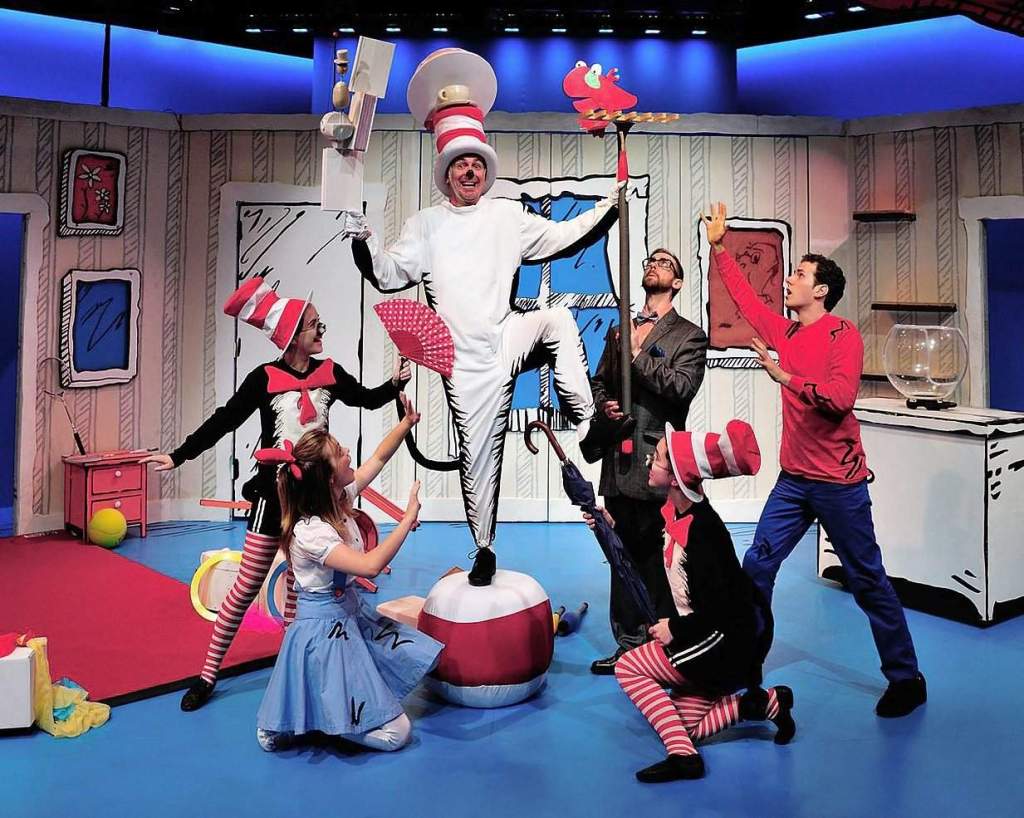 The new Lutcher Incredible Kids Events season has been announced, and it features many great entertaining events, including the highly popular “Dr. Seuss’ The Cat in the Hat” with two performances on April 14, 2016. Visit www.lutcher.org for more information. (Photo by Bruce Douglas)

The 2015-2016 season has just been announced for the Lutcher Theater of the Performing Arts. Along with the great Broadway productions and concerts, the annual kids season is shaping up to be a great one also.

The Lutcher Incredible Kids Events series is one of the largest performing arts series of national and international touring companies for children in a four-state area, which includes Texas, Louisiana, Oklahoma and Arkansas, according to information provided by Jim Clark, the director of the Lutcher Theater in Orange.

Along with being fun and entertaining, the performances also meet Texas and Louisiana-state learning criteria, which makes these events popular choices for school districts and field trips. The events are open to the public as well.

“This year our kids shows are mostly based on books,” said Lynae Sanford of the Lutcher Theater. “They are ‘page to stage’ events, and those are really popular with all ages.”

Jim Clark, the director of the Lutcher Theater, agreed, and said these productions are performed by renowned groups from around the world, including London, Nova Scotia and the Netherlands, as well as national groups from Phoenix, New Orleans and Dallas.

The season begins with “The BFG” (Big Friendly Giant) at 9:30 a.m. and 11:30 a.m., Tuesday, Oct. 6. The play, which is produced by the Dallas Children’s Theater and is suitable for children in second through fourth grade, is the story of a larger-than-life vegetarian and a young orphan girl, who learns heroes can come in all sizes.

“Caps For Sale: The Musical” is featured for two performances on Wednesday, Oct. 21 and celebrates the 75th anniversary of this beloved children’s classic book which features a new broadway style musical. The program is produced by Adventure Theatre MTC.

On Monday, Nov. 9, “Spot,” produced by Theater Terra, will have students and parents on an adventure to the farm of his father, Sam, where all animals are lost. The audience will have to help Spot and his friend, Helen, find the animals and bring them back.

Tall Stories of London brings its production of “Room on the Broom” to the Lutcher Theater on Thursday, Nov. 19. The musical is the tale of a witch and her cat, who are flying happily on their broomstick – until a stormy wind blows away the witch’s hat, bow and wand. A helpful dog, bird and frog find the witch’s lost things, and they all hop on the broom for a ride, but the brook breaks and the adventure really begins.

One of the most anticipated events each year features the Lightwire Theater, and the company returns this year for the Lutcher Theater’s annual holiday event. The black light spectacular will be held on Wednesday, Dec. 16, and features their signature brand of dazzling visuals, poignant storytelling and music with the story of a young bird named Max and his family as they head south for the winter. When Max gets blown off course during a snowstorm and tries to make his way home, his adventure begins.

The Kennedy Center Theater for Young Audiences on Tour returns on Friday, Feb. 5, 2016, with “Elephant Piggie’s ‘We are in Play!’” This brand-new vaudevillian romp of a musical, features Elephant Gerald and Piggie sing and dance their way through plenty of pachydermal peril and swiney suspense–facing fundamental questions like, what do you wear to a fancy pool costume party? It’s a guaranteed good time for all ages.

“Goodnight Moon and the Runaway Bunny,” produced by Mermaid Theatre of Nova Scotia, will be featured on Wednesday, March 1, 2016. The production is adapted from the Margaret Wise Brown 60-year-old classic story and features animal puppets, stunning scenic effects and amazing music

A sure-to-be-popular selection this season is “Dr. Seuss’ The Cat in the Hat,” which is scheduled for Wednesday, April 14, 2016. When Sally and her brother answer the door, they know the Cat in the Hat is full of mischief and mayhem. The challenge is getting the house straight before their mom comes home.

“Moon Mouse A Space Odyssey” will bring the children’s season to a close on Wednesday, April 27, 2016. Marvin the mouse wants to be popular, but the “cool” rats constantly pick on him and bully him, so he escapes into his world of science books and fantasy and has the space adventure of his life.

All Lutcher Incredible Kids Events productions are available for two showings – 9:30 a.m. and 11:30 a.m. – on the day of the event. Individual adult tickets are $10, students tickets are $5, but tickets for groups of 10 people or more are just $5 each. Tickets for all children’s series events can only be purchased by calling the box office at 409-886-5535.