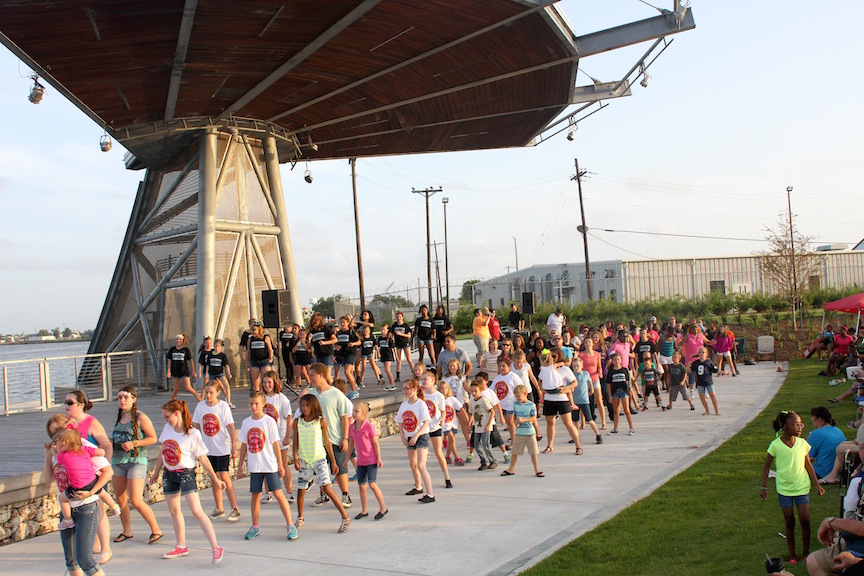 Dozens of youth and adults participated in the first ever National Dance Day event held in Orange County in July 2014. The event returns to the Orange Riverfront Pavilion . (Tommy Mann Jr. / The Orange Leader)

Summer is about to heat up with the biggest dance party of the year.

For the second consecutive year, the Orange Convention and Visitors Bureau and What’s Happening Orange County? Are joining forces for a National Dance Day event in Orange County. The event will be held from 7 p.m. – 9 p.m., Saturday, July 25 at the Orange Riverfront Pavilion and Boardwalk, which is located at 601 W. Division at Fifth Street in downtown Orange.

Penny LeLeux, owner and operator of the “What’s Happening Orange County?” page on Facebook, is once again heading up the event. She, along with the Orange Convention and Visitors Bureau, helped make the National Dance Day event in Orange County a huge success in 2014 and have bigger aspirations for 2015.

“We are continuing what we started last year, but we are growing and have doubled the number of dance teams involved already,” said LeLeux. “We even have some groups from Beaumont participating this year, and three groups which cannot take part in our even this coming week have already committed for next year.”

According to its official website, National Dance Day is an annual celebration which takes place on the last Saturday in July. It was launched in 2010 by Nigel Lythgoe, the co-creator of “So You Think You Can Dance” and co-president of the Dizzy Feet Foundation.

The Dizzy Feet Foundation was founded in 2009 by Lythgoe and director Adam Shankman, among others, to support, improve and increase access to dance education in the United States. It also provides scholarships to talented students studying at accredited dance schools, studios, universities and institutions.

Major dance events are held each year in large cities such as Los Angeles, New York and Washington, D.C., along with cities such as Austin and New Orleans in 2014, while smaller events, such as the one held locally, are held in other communities around the country.

People interested in participating in Saturday’s National Dance Day event can learn two official dance routines, one for beginners and one for advanced dancers, ahead of time on YouTube.com, dizzyfeetdoundation.org or octx.info.

According to a press release, this year’s beginner tutorial was choreographed by tWitch, captain of So You Think You Can Dance Team Street, while the advanced routine was choreographed by Team Stage’s captain, Travis Wall. Guests are encouraged to learn the dance routines and perform them with the groups on July 25.

“The beginner routine is pretty easy and it’s not intimidating at all,”LeLeux added. “It may be simpler than the routine we had last year. For those people who don’t have time to learn the routine in advance, we will have a ‘down and dirty’ quick class that day.”

More than 50 members of local dance troupes participated in 2014, along with more than 300 members of the public in attendance. The excitement is already building this year as several local dance group organizations, such as Thayer Academy, Orange Blossoms, OCP Young Peoples Theater Workshop kids, Orange Jazz Company, Bonnie Cokinos and Motion Dance, have already committed to participate. Gloria Barnhart will once again serve as emcee.

The public is invited to come out and join in on the fun. Guests are welcome to bring coolers with snacks and beverages, but glass containers are not allowed. Also not permitted are dogs and other pets. Guests are also encouraged to bring blankets or lawn chairs.

Vendors will be on site as well offering guests cooling refreshments such as ice cream and snow cones, and tasty pizza.

LeLeux said T-shirts are being offered this year and can be purchased in advance and picked up the day of the event. Shirts are bright yellow and cost $15-$16, depending on size, and can be ordered through the What’s Up Orange County? Facebook page or at True Colors in Orange.

A special added feature along with the routines and the line dances has been included as part of the event this year.

“We want everyone to get their best ‘Soul Train’ moves on too,” LeLeux continued. “We’ll set up lines on each side and people can show their best moves for the finale.

“You don’t have to be perfect to be part of this National Dance Day event,” she said. “It’s just about getting up there, having some fun and maybe get a little exercise in the process.”