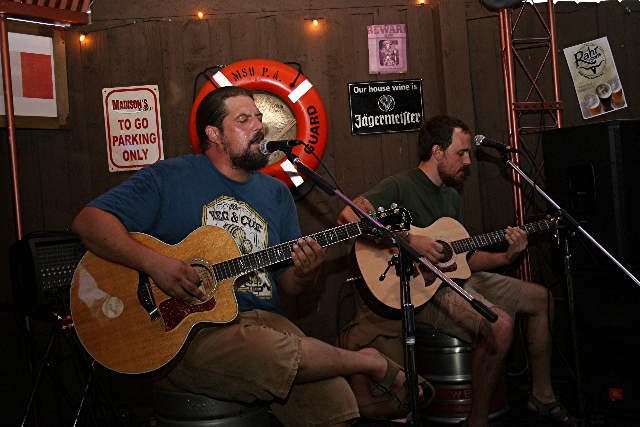 Ryan Gist, at left, and Trevor Batson are just two of the local musicians performing at the all day “Texas Unplugged” singer-songwriter showcase being held at The Gig in downtown Beaumont. The event is open to all ages, until 8 p.m., and admission is $5 at the door. (Tommy Mann Jr. / The Orange Leader)

One local musician looking for an outlet for his music has quickly found others who share his passion.
Ashton Courtney of Beaumont is the man with plan behind this Saturday’s all day event, “Texas Unplugged,” which will feature more than a dozen singer-songwriters from across Southeast Texas performing solo showcases inside The Gig in downtown Beaumont. The doors open at noon and all ages are welcome. After 8 p.m., the event becomes strictly for ages 18 and older.
Ashton is a well-known vocalist and guitarist amongst members of the Southeast Texas music scene, which included time as the frontman for local band, The Urges. Now, the 22-year-old is looking to explore his other musical options.
“Originally, I was just looking for a show for me. I wanted it to be something I could play,” Ashton explained. “But now it has turned in to something more.”
The originally conceived solo showcase is now officially an all day event, “Texas Unplugged,” and will feature an array of talented musicians on one stage.
“It’s a community coming together, not just the songwriters, but everyone who wants to be a part of this from the performers to the fans,” he added.
The line-up features acoustic performances by Lee Pelly, Trevor Batson, Ryan Gist, Ariel Bush, Steve Fitzner, Rob Wellz, Marjorie Grace, Chris Stacy, Sgt. Doobie and the Good Times Revolution, Tim Apshire, Shane Jones, Amy Goloby Band, Will Castille, the Killawatts and J. Hardin.
Ashton is hoping this is the start of a new trend for the local music scene and is eager to see it grow.
“We have a really active metal scene and an active punk scene, but there’s really nothing for songwriters,” he said. “We all want to be able to showcase our music, and this is one way to do it.”