3 Doors Down to kickoff summer tour in Lake Charles 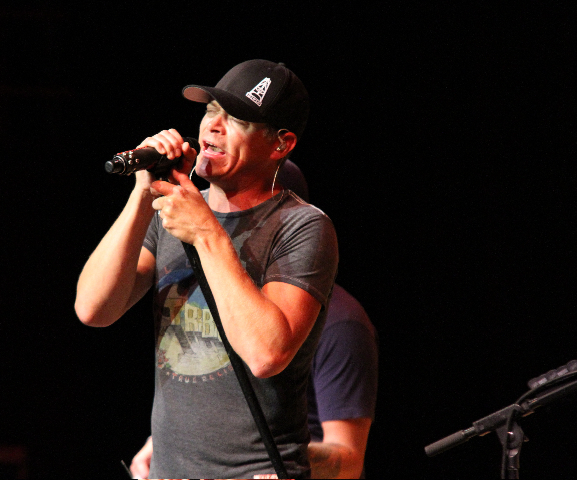 Brad Arnold and the rest of his bandmates in 3 Doors Down will perform Thursday, July 2, in Lake Charles, La. at L’Auberge Casino and Resort’s “Party by the Pool” concert series for ages 21 and older. Special guest is Theory of a Deadman. (Tommy Mann Jr. / The Orange Leader)

National rock act 3 Doors Down loves being on the road. Especially when it involves a showcase in Southwest Louisiana or Southeast Texas.
3 Doors Down is hitting the road once again for a 25-date summer trek across the United States. The tour kicks-off on Thursday, July 2 with an appearance at L’Auberge Casino and Resort’s “Party by the Pool” concert series for ages 21 and older. The show starts at 8 p.m. with a performance by Theory of a Deadman. Tickets are available at all Ticketmaster outlets and online at www.ticketmaster.com, as well as the L’Auberge Casino and Resort box office.
The band’s last performed locally on Aug. 31, 2014, inside the Jefferson Theatre in Beaumont with its acoustic “basement” tour. With a new album waiting in the wings, the group, which is comprised of Brad Arnold, vocals; Chris Henderson and Chet Roberts, guitars; Greg Upchurch, drums; and Justin Biltonen, bass, is ready to turn up the volume and unleash some new rock and roll.
“Sunday is our last official day in the studio and we are ready to get out on the road,” said guitarist Chris Henderson in a telephone interview. “We have 13 songs recorded for the new album, and we cannot wait for people to hear them.”
The band’s “basement” tour was a huge success, as it allowed some fans a unique experience. Fans lucky enough to purchase the special packages were allowed seating on sofas set up on stage as part of the “basement” tour and able to watch the show from the band’s perspective. Fans will get a similar opportunity this tour.
“We are going to let people on stage again, but this time it will be in bleacher-style seating,” Henderson said with a laugh. “That should be really interesting, especially in this setting. It’s a cool experience, but it can get a little weird too when you get the really drunk ones on stage. They seem to want to be a little more ‘involved’ in the show.”
Henderson said the new album, “Us and The Night,” will be released anywhere from late summer into mid-autumn.
“There’s not a hard date set yet. We have to met with the label and discuss things,” he added. “But if I was an educated man, it will be probably be somewhere between September and November.”
The band is expecting fans to be clamoring to hear new material and 3 Doors Down aims not to disappoint.
“We will definitely be playing some new songs, probably all of the ones we expect to be singles,” Henderson elaborated. “If Brad (Arnold) had his way, we would play the whole new record, but we have to make sure and play a lot of other songs. People come to our shows to hear their favorites too, but there will be a mix of new and old.”
3 Doors Down’s summer tour will feature a variety of special guests and opening acts, including a Fourth of July weekend run with Theory of a Deadman, co-headlining dates with Seether, and special appearances by Collective Soul in other locations. However, that was not the plan originally.
“We had the tour booked with another big band,” Henderson said with a bit of annoyance in his voice, but not elaborating on which group it was. “But they flaked out on us. What are you going to do? You know how some ‘rock stars’ are.
“So, we had to scramble to book the tour,” he continued. “We made some calls to a lot of our friends and pulled in some favors, and this is what we got. We think fans will be just as happy.”
Although no official plans have been made for the latter portion of the summer and into autumn, Henderson said it will all depend on the new album and response from fans as to the group’s plans for the remainder of 2015.
“The new music will dictate what we do after this tour,” Henderson said in conclusion. “But our fans know we will be out on the road somewhere. We give it all we can and we do it with honesty and integrity. Everything we do is just from the heart and straight ahead rock and roll. And that’s the way we like it, and our fans do too.”
For more information on the band, visit www.3doorsdown.com, or visit www.llakecharles.com for upcoming events at L’Auberge Casino and Resort.