Family is way of life for Delk 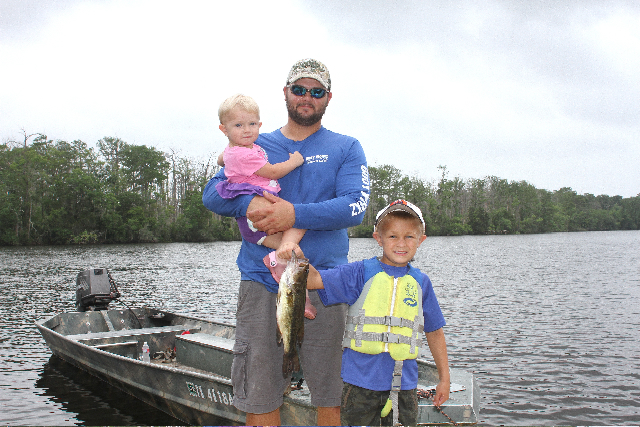 Joe Delk, at center, believes spending time with his family and bonding with children through a variety of activities, is what helps him be a good father. Joe, at center, is shown holding his daughter, Bailey, while his son, Jay, holds a small bass he caught after a morning of fishing. (Tommy Mann Jr. / The Orange Leader)

A cloudy morning and light drizzle permeate the air, but that has not stopped Joe Delk from doing one of his most favorite activities. Spending time with his children.
Joe Delk is the type of man who understands the importance of family and how precious spending time with his loved ones is. It is the thing he enjoys more than anything and does as often as possible.
“I love spending quality time with my children,” Joe said while taking a break during a morning fishing excursion. “I like doing the things I like, which is almost anything outdoors, but I like to do those things with them. We go swimming a lot and fishing two or three times each week. We are almost always on the water. And it’s something they like to do now too.”
Joe credits his father with the attributes of being a good father to his own children, including the desire to be together in almost every activity.
“My dad has always been there for our family when I was growing up, and he made sure we never went without,” Joe explained before laughing “We especially never went without hunting and fishing gear.”
Joe, 28, has been married to his wife, Angela, for seven years. The young couple has a six-year-old son, Jay, and a two-year-old daughter, Bailey. Both youngsters enjoy spending time on the water fishing with their father based on the family’s recent fishing trip.
“I think what makes Joe such a great dad is that he puts us first,” said his wife, Angela. “He doesn’t think of himself. It’s the family first, the kids first. He even puts others first before himself. He’s a big helper to so many people. That’s just his personality.”
Besides outdoor activities such as hunting or fishing or swimming, Joe helped coach his son’s Shetland division coach-pitch baseball team, the Rangers, this spring. He later helped coach the all-star team. As a surprise present for Father’s Day, which is Sunday, June 21, Angela and the children have purchased tickets for him and the family to see the Texas Rangers when they travel to Houston to take on the Astros on Sunday, July 19.
“It’s something we know he will be really excited about,” Angela added.
As Joe loads the boat to resume the fishing trip, his son, Jay, hooks onto a nice two-pound bass while fishing from the dock only to have the bass come unbuttoned less than two feet from the dock. His dad can only smile as he reminds the youngster to set the hook before reeling the bass up to the dock.
“I want my children to understand how important they are and how important spending time with them is,” he said. “If I can teach them anything, it is that I want them to know how its important having a close-knit family is and I hope they have the same bond with their children and family.”