King dedicated to helping others after winning battle against prostate cancer 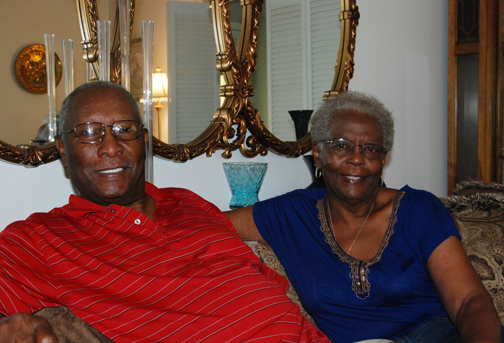 Joe King and wife, Lois, talk about the changes in their lives since Joe was diagnosed with Prostate Cancer in 2001. Early detection, they both agreed, was the key to success in battling the disease. (Dawn Burleigh/The Orange Leader)

PINEHURST — Joe King was going through a checklist for retirement when he was given the news he had prostate cancer in 2001.
“I was retiring from Inland Papers after 33 and a half years of service,” King said. “There were no signs anything was wrong.”
A urologist noticed King’s PSA was a little high and ordered a biopsy after the numbers did not change with antibiotics.
“The doctor gave me two choices,” Kings said. “We could watch and wait or start treatments. I opted for treatments.”
King received 37 external Beam Radiation treatments at Baptist Hospital Beaumont.
“The doctor told me early detection is the key to success,” King said. “It does not give early warning signs. By the time you have signs, it usually requires radical treatments.”
King said he is doing great now.
His doctor suggested a screening once a year, but King said he would rather be safe than sorry and is screened twice a year.
“I have to thank God for the Gift of Life,” King said. “I saw in the paper, in 2002, they were starting a support group and I went to one meeting. It has been a big part of my life and my wife’s life.”
King has dedicated his life to helping others and volunteer at the Gift of Life.
“It is important for men to get checked and have awareness of what their body is telling them,” King said.
Lois King, Joe’s wife, said she did not know much about the disease when her husband first came home and told her the news.
“The key is early detection,” Lois said. “I have been going with him once a month to the meetings and I think it has really helped us as husband and wife.”
“Gift of Life” Prostate Cancer Support Group Meeting is 6 p.m. second Tuesday of each month at the St. Mark’s Episcopal Church, 680 Calder in Beaumont.
“Gift of Life” and Baptists Hospitals of Southeast Texas will host a Men’s Healthcare Screenings 9 a.m. – 11 a.m. Saturday, June 20 at the Wilson Building at Lamar State College Orange.
“The disease is 100-percent preventable with early screening,” Christina Morris, BSN, RN, program manager at Julie Rogers “Gift of Life” Program said. “Men tend to shy away from going to the doctors so we have tried to make this a one stop shop.”
The free, if eligible, screenings include PSA Blood Test, Cholesterol , HIV, Blood Pressure, Hepatitis C, Blood Sugar Check and an On-Site Physician Consultation.
To register for the screening, call 409-860-3369.