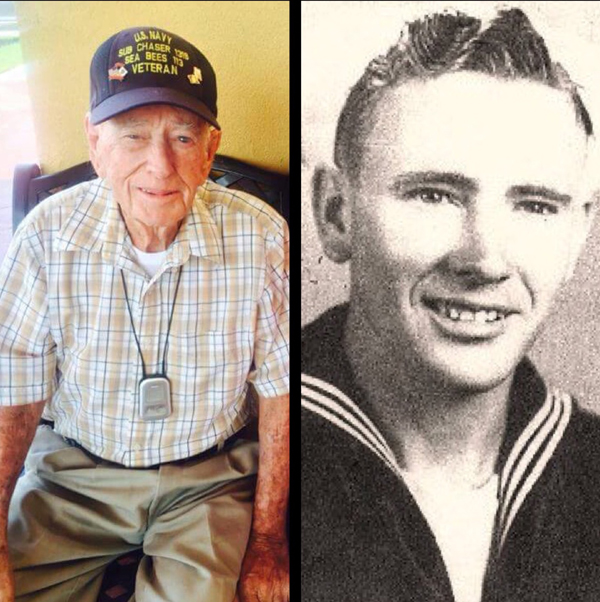 Nicholas Matthew “Nick” Wingate, Sr., died at his home surrounded by his family on Friday, June 12, 2015.  He was 96 years old.  He was born on May 17, 1919 in Orange, Texas to Claude Louis Wingate and Lumea Bonin Wingate.  He was the second child and second son in a family of eight children.  He grew up in a very loving and close Christian family – a closeness he and his siblings maintained throughout their lives.

Nick’s earliest memories included a lot of chores.  As early as middle school, he milked cows everyday as well as delivered milk to the elderly who were in need.  The family received chickens bi-weekly by train which had to be processed for customers of the family meat market.  It was a process that required speed.   Nick did all of this while maintaining a paper route by horseback and later by bicycle.  At age 14, Nick began to accompany his dad, Claude, to a meat packing plant to process cattle where he watched and learned.  This is where Nick learned the meat trade.

Nick graduated from Orange High School in 1936.  He worked other jobs at grocery stores before attaining a job at Levingston Shipyard.  When World War II broke out, he enlisted in the U.S. Navy serving in the Pacific.  He served on a Submarine Chaser 1319; he also served with the Seabees 113th Battalion.  Nick survived the explosion of the USS Mount Hood in Manus Islands in which he was thrown overboard.  He lost hearing in one ear due to that blast.

Nick met and married the love of his life, Jo-an Wilson Wingate upon returning from World War II.   They were married on June 26, 1946 and had celebrated 66 years prior to her death in August 2012.

He and his wife, Jo-an ran the Wingate Meat Market in Orange for decades.  This continued a Wingate family tradition of a meat business which first began in Orange around the year 1906, and continued with Nick’s dad and brothers after the war.  During the 1960s, Nick and Jo-An took over the business solely.  While running the meat market, they raised their family including their son, Nicholas Matthew Wingate, Jr. and daughters, Betty and Polly.  Their son, Nick Jr, joined them in running the meat market.  Nick was proud that he and his family worked hard serving their community, many times providing meat to those who would otherwise do without.

He loved fishing.  He taught his family to fish.  There were lots of fishing trips and many fishing stories.  The market was filled with mementoes, including small sharks, which Nick, his son, his daughters, his nephews and nieces, his good friends Artie Longron, Charles Latham, and Phillip Fuller, and other friends and relatives had brought back from fishing trips on Nick’s oceangoing boat.   Nick was a master at story- telling and jokes; people came to buy meat at his market and their reward was always a good Wingate story or joke.

After years of working and running the meat market with his wife and son, Nick Jr., the market was destroyed by Hurricane Rita in 2005.  The market had been in business 99 years.  It was a bittersweet day when they decided not to rebuild.  Nick decided to spend his time fishing and maintaining his gardens at home.  He loved working with the soil as a reminder of his youth.  Even into his 90s, Nick spent hours on his boat fishing with family and friends.  It was who he was a “master fisherman.”

The Wingate family was blessed to have Nick Wingate and his siblings as role models.  They took the time to teach their skills and love of life to their children and nieces and nephews.  This included many trips to Cow Creek for family reunions and trips to the Wingate farm for holiday firecrackers, trips to the creek, blackberry picking, riding of horses and other great memories.

Most of all, Nick loved his time with his family.  He spent many hours cooking his famous pork ribs while Jo-an and Nick Jr cooked the famous gumbo and sauce piquant.  Nick’s daughters, Betty and Polly, lived with their spouses in New Mexico.  Nick was thrilled with their annual or semi-annual trips to Orange for his family time with all of his children and grandchildren where they all fished and cooked together.  After Nick lost his wife, Jo-an, he continued his retirement with his son, Nick, and Nick’s fiancé, Brenda, with fishing, cooking, and managing his garden.  Nick and Brenda took excellent care of Nick Sr. the last three years of his life.

Nick was preceded in death by his wife, Jo-an Wilson Wingate; his parents, Claude and Lumea Wingate; his brothers, Lance, Junius, Roy, and Cecil; his sisters, Julia Bacom, Mabel Lawrence, and Barbara Marshall.  Nick is survived by his son, Nick Wingate, Jr. and his fiancée, Brenda McMullen; his daughters, Betty Doak and her husband, Kent, and Polly Miller and her husband, Tim, all of New Mexico; Cheryl Schmidt, Debbie Fentiman, Lisa Doak, Lori Johnson, Molly Swisse and Christopher Wingate; nine great grandchildren and, more than 42 nieces and nephews.

The family would like to thank Brenda’s mom, Patsy Donaldson, and caregivers Phyllis and Elton Chavis for their love and support of Nick Sr.

Nick Wingate, Sr. was a rock in our family.  Hard worker.  Father.  Soldier.  World War II veteran.  Businessman.  Cowboy.  Fisherman.  He has been promoted to Master Fisherman in heaven.  We know that he is now at that one private secret fishing hole for all his family and friends.