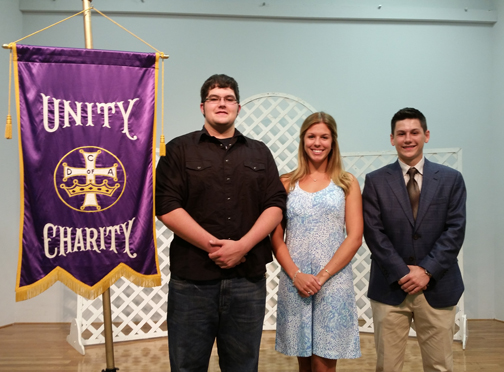 The Catholic Daughters of the Americas, Court Saint Cecilia, held its June Dinner to honor three local youths.  Scholarships were awarded to graduating seniors, Morgan Worthy and Will Hughes.  Recipients were selected on the basis of academic achievement, community and church service, and character.
Morgan is a graduate of Orangefield High School, was 14th in her class, a member of the National Honor Society, and named All-Scholastic Athlete for maintaining her scholastic average while participating in several varsity sports.  She served as an Altar Server, Lector, and Eucharistic Minister in her church, Saint Helen Catholic Church.  She plans to attend Texas A&M and become a Physical Therapist.
Will is a graduate of Deweyville High School and is a member of Saint Mary Catholic Church where he is an Altar Server.  He excelled academically and was also active in sports.  He is an Eagle Scout and plans on attending Lamar University to major in Civil Engineering.
Also honored at the Dinner was Vinny Hale from Little Cypress Mauriceville High School.  Vinny will be a senior there next year and he recently won the Stark Reading Contest in the Prose category.  He entertained the diners by reprising his speech, a selection from Edgar Allan Poe.
The Catholic Daughters are very proud to support these exceptional young people in their educational pursuits.