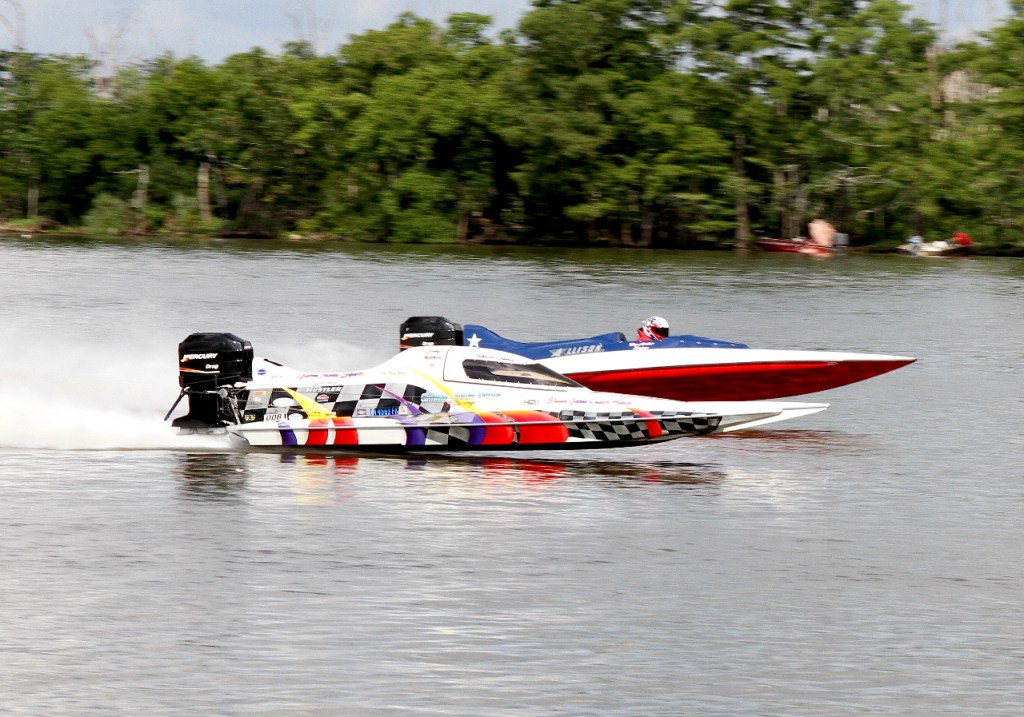 The 2nd Annual Shootout on the Sabine boat races will be held from 11 a.m. - 6 p.m., Saturday, May 30 and Sunday, May 31 on the Sabine River at the City of Orange Boat Ramp. Admission and parking are free. A concert featuring former Bridge City resident and Southeast Texas native Kree Harrison will take place Saturday night at the Orange Riverfront Pavilion at the corner of Fifth Street and West Division in downtown Orange. Benji Davis will open the show. Admission is free. (Tommy Mann Jr. / The Orange Leader)

ORANGE — Fast boats and great live entertainment will make the final weekend of the month one to remember.

The Orange Convention and Visitors Bureau has announced the second annual Shootout on the Sabine boat racing event in Orange. The “Shootout on the Sabine” will take place from 11 a.m. – 6 p.m., Saturday, May 30, and Sunday, May 31, on the Sabine River at the City of Orange Boat Ramp located off Simmons Drive.
The “Shootout on the Sabine” boat races differ from the yearly event in September as this is a dragboat racing event where two boats race side-by-side on a straight course instead of a circular course like the races in September. Depending on the classification, speeds of more than 100 mph are possible.
“These races are really entertaining,” said Ashley Mahana, coordinator of the Orange Convention and Visitors Bureau. “The boat races are always popular here, but we have made sure there are plenty of things to do throughout the day for adults and children.”
The “Shootout on the Sabine” is affiliated with Deep South Racing Association, which is the group behind the annual and highly popular “Showdown on the Sabine” held every September in Orange.
The new racing event is a free and open to the public. Parking is free also. There will be vendors offering a variety of food, as well as bounce houses for the kids and something new for all to enjoy in between races.
“We have added a stage to the grounds and will have karaoke, so anyone who wants to get on stage and sing will have that chance,” she added.
Live entertainment is also part of the “Shootout on the Sabine,” and the City of Orange CVB has opted for something different as former Bridge City resident and Southeast Texas native Kree Harrison will perform on Saturday night, May 30 at the Orange Riverfront Pavilion, which is located at the corner of Fifth Street and West Division in downtown Orange.
“We decided to have Kree Harrison perform because I wanted to bring a female artist in for one of our events,” Mahana explained. “I wanted to try something different. She is somewhat-local and she has a good fanbase. We think a lot of people will be excited for this show.”
Adding to excitement, Harrison has agreed to have a booth at the boat races during the day Saturday, tentatively from 11 a.m. until early afternoon, to meet fans and sign autographs.
The music at the Orange Riverfront Pavilion will start at 7:30 p.m. with Benji Davis performing. Harrison will perform at 8:45 p.m.
“The races and the concert are all part of a great weekend of fun for the whole family,” Mahana said.
Visit www.orangetexas.org for more information.