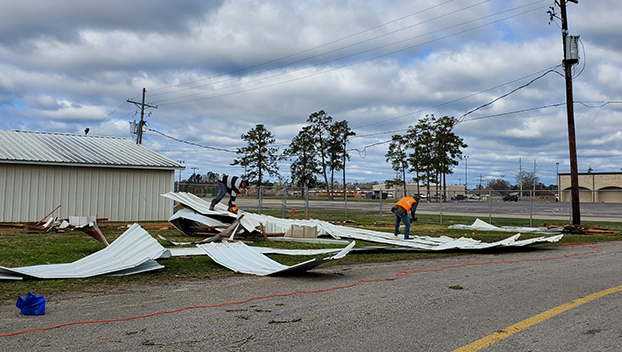 Orange County Judge John Gothia said he will be issuing a disaster declaration following a line of Tuesday afternoon storms that resulted in tornados and widespread damage.

“We were out most of the night,” he said Wednesday morning. “Our crews are back out this morning trying to clear the rest of the roads and get stuff off of power lines.”

Crews from Entergy Texas, he said, have also been out in the county to restore power to the thousands left without more than 12 hours after winds reaching gusts of 35 miles per hour were recorded by the National Weather Service. At 5 p.m. Tuesday, more than 32,000 Entergy customers were without power – 17,300 in Orange County.

The Orange, Port Arthur, Winnie and Beaumont areas were the hardest-hit areas, according to information from Entergy.

At 4:22 p.m., a tornado warning was issued by the City of Nederland, where wind gusts reached 55 miles per hour. Tornados in Orange County were confirmed by NWS radar.

City crews, he said, are out working to clear trees that had fallen on roadways.

“We didn’t have much damage,” he said. “It looks like we got through it pretty well. We dodged a bullet, as they say.”

Gothia expects to have a full damage assessment of homes by Wednesday afternoon.

There were two injuries reported in the county — one from a house collapsing and another from a limb that penetrated a roof.

Neither of the injuries were life threatening.

“With as much damage as I’ve seen, it could have been a lot worse,” the county judge said.

The issuance of a disaster declaration will make state funding available to the county and its residents.