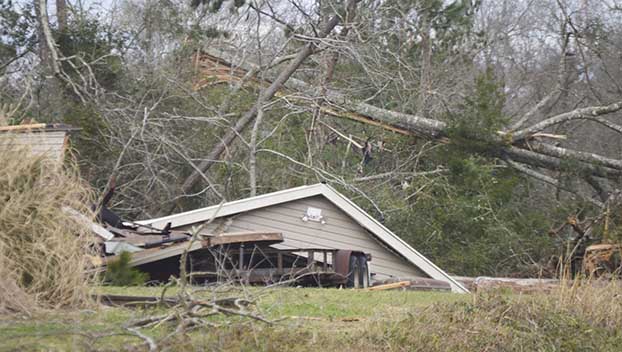 Approximately 100 homes in Orange County sustained damage Tuesday following a line of thunderstorms that produced tornados across the region.

“Most of those are what I’d say are moderately damaged, but we do have 12-15 in the severe damage category,” said County Judge John Gothia.

What damages translate to in dollars had not been determined as of Wednesday afternoon.

Two people were injured during the storm. Gothia said one required medical treatment and has been released from the hospital.

At 5 p.m. Tuesday, Entergy Texas had 32,000 customers without power in Southeast Texas, with 17,000 residing in Orange County.

More than 700 employees were working on electrical service in the Orange area, Entergy said.

Governor Greg Abbott released a statement asking everyone impacted by the storms to self-report damaged property to the Texas Division of Emergency Management’s iSTAT survey.

“The State of Texas is working around the clock to ensure those affected by winter weather and severe storms have the support they need to recover,” Abbott said in a written release.

“I urge all impacted Texans to self-report sustained damage information to iSTAT. This is a critical tool for our local and state officials to determine eligibility for federal assistance, identify damage in regions impacted by severe weather, and direct volunteer resources to communities in need.”

Data collected assists in an evaluation of damage as well as disaster assistance.