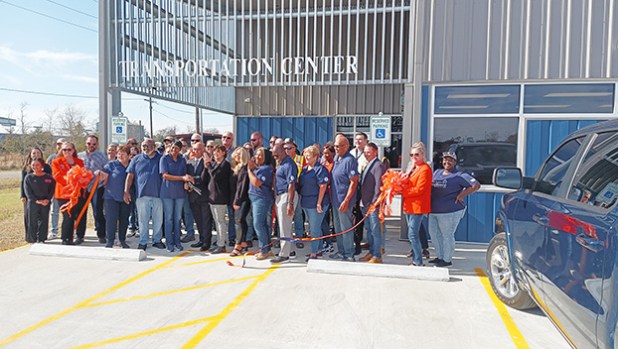 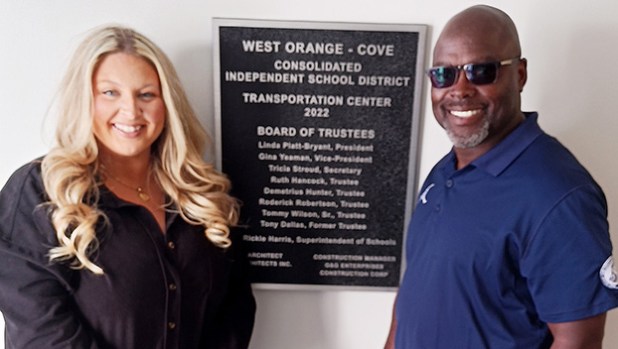 Leigh Anne Harrell, ambassador for the Orange County Chamber of Commerce, stands with and Dr. Richard Harris, Superintendent of WOCCISD in front of a dedicated plaque at the transportation facility. (Sierra Kondos/Special to The Leader) 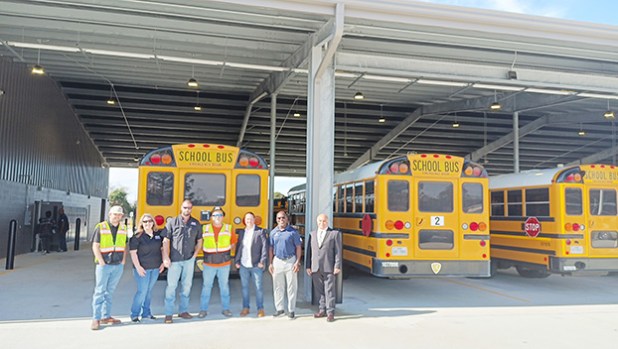 WEST ORANGE — The problem facing bus drivers and maintenance in West Orange was a safe place to work outside of the sometimes harsh Southeast Texas weather.

Manuel Vera, director of transportation for West Orange-Cove Consolidated Independent School District, said a new facility unveiled this week for the community provides shelter for the fleet and options for in-house maintenance.

“Before, our busses could not fit under the shelter provided, and our mechanics had to work outside,” Vera said. “This caused delays if the weather was bad.”

Vera said the fleet reflects on the school district, adding it is important to keep transportation maintained for the students.

Under the main roof are many new amenities designed to enhance the drivers’ and the maintenance crews’ daily jobs, according to Clay Richards, the new transportation building’s architect.

“The drivers now have a large training room in which they can gather both pre and post routes,” Richards said.

The dispatch office provides parking for 20 busses under a roof that allows all the drivers to access their routes no matter the weather.

Being under one roof also extends the life of the busses.

Richards said the design took into account the safety of those working in and around the busses.

“The design of the facility allows a driver to enter the secured facility via proximity access cards, fill their tanks with fuel and load into their bays without ever having to place the bus in reverse,” he said. “The site is also equipped with lighting that will turn on as you approach the building.”

There are four mechanics bays for the servicing of the fleet, including oil changes, tire rotations and engine repair, plus a full-service bus wash.

The design for the new transportation building took eight months to complete.

“Working with Dr. Harris, his staff and the board at WOCCISD has been an exceptional experience for Architects Inc.,” Richards said. “The faith that they have shown in our firm’s ability to take a scope of work and make it into a building that is not only aesthetically pleasing, but also highly functional is greatly appreciated. The district is always searching for ways to improve upon, not only the facilities, but the lives of its employees and the children that it serves.

By hiring Architects Inc., a firm based out of Bridge City, the District also ensured that their tax dollars stay local.

“Having an owner that is willing to work side-by-side with you throughout the process always leads to a successful project at the end,” Richards said.

West Orange-Cove held a ribbon cutting for the new transportation facility Monday. A tour of the building and reception followed. The new Transportation Department was part of the 2018 Bond Proposal designed to house all of the District’s school busses and white fleet vehicles.