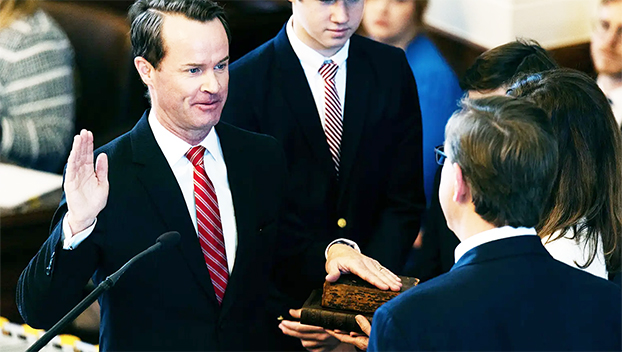 Dade Phelan is sworn in as speaker of the House at the state Capitol in Austin on Jan. 10, 2023. (Evan L'Roy/The Texas Tribune)

Texas House of Representatives members on Tuesday voted 145-3 to elect state Rep. Dade Phelan, R-Beaumont, to a second term as speaker — the most powerful position in the lower chamber.

He defeated state Rep. Tony Tinderholt, R-Arlington, who was nominated by ultraconservative members who say Phelan is unreasonably accommodating of Democrats in the chamber. Tinderholt cast a ballot for himself, as did two Republican members who nominated him, Nate Schatzline of Tarrant County and Bryan Slaton of Royce City.

Phelan said he would shepherd bills through the chamber that have the support of a majority of members while also ensuring that lawmakers from the minority party would have a meaningful voice.

He said it is important to preserve this Texas House tradition.“Our rules keep the game fair, but they do not dictate the outcome,” Phelan said. “We will have divisions — every session does — but that division does not have to define us.”

He earned the support of every Democrat in the House, including Toni Rose of Dallas, who praised Phelan for supporting her bill in 2021 to expand Medicaid coverage for new mothers. Tracy King, a Uvalde Democrat, commended Phelan for meeting last week with families of victims of the Robb Elementary School shooting this past May.

“They agreed on some things and they disagreed on some other things,” King said. “But throughout the entire meeting he was honest with them. He was upfront, answered those questions boldly, and it was impressive. … Those are the qualities I find very, very admirable.”

Though he opposes raising the age to buy guns from 18 to 21, a demand of some Uvalde families, Phelan pledged to help craft legislation to make schools and children safer.

Phelan also cited recent reporting by The Texas Tribune about an increase in rural hospitals no longer delivering babies and committed to reversing that trend. He said the record $32.7 billion budget surplus should allow lawmakers to make a “down payment on the future of Texas,” citing additional needs including roads, clean water, flood mitigation and high-speed internet.

That surplus money could turn out to be a political minefield this year as lawmakers have competing proposals for the funding. Gov. Greg Abbott campaigned on using half the surplus to pay for property tax relief, while Lt. Gov. Dan Patrick has cautioned that lawmakers are constitutionally capped from spending all the money. (The Legislature can vote to bust the spending cap, however.)

In his nominating speech for Tinderholt, Slaton said the tradition in the House of selecting some minority party members — in Texas, Democrats — for committee chair positions is an overly generous “consolation prize” for losing an election. He said Phelan’s adherence to that tradition means Republicans can pass only some conservative legislative priorities each session while ignoring others.

“At some point, we need to realize we’re settling for just enough wins to get reelected,” Slaton said.

Making a pitch for himself, Tinderholt praised U.S. Rep. Chip Roy, R-Austin, for challenging the election of U.S. House Speaker Kevin McCarthy in an effort to reform how that chamber is run. He urged Texas House members to choose him as a similar agent of change. Roy was part of a small contingency of U.S. House Republicans who blocked McCarthy’s leadership for more than a dozen votes, grinding Congressional business to a halt for four days last week.

“Many of you have told me you are worried about what will happen to you if you vote for me,” Tinderholt said. “That kind of environment should not exist in this chamber. … I’m committed to ensuring every single Republican legislative priority is debated on the House floor.”

But it was not to be. When members cast ballots, the only support for Tinderholt came from the two members who nominated him. All of the members of the ultraconservative House Freedom Caucus appeared to back Phelan; the group has not yet released its roster for this session.

A 47-year-old financial broker, Phelan was first elected two years ago. He replaced one-term speaker Dennis Bonnen, who retired after becoming embroiled in a secret recording scandal in 2019 in which he bashed members of his own party.

Phelan guided the House through the 2021 legislative sessions, which some observers called “the most conservative” in state history. Lawmakers passed new laws banning almost all abortions and allowing permitless carry of handguns.

But conservative grassroots activists said the House had not gone far enough on conservative priorities like banning gender-affirming care for transgender children and have often butted heads with Phelan. Critics attacked him for appointing Democrats to leadership positions in the chamber, following a long-held chamber tradition to appoint members of the minority party as committee chairs. Phelan has not budged on the issue, indicating he once again plans to allow some Democratic chairs and arguing that the Texas House operates better on a bipartisan basis and eschewing the divisiveness seen in Washington, D.C.

He also said conservatives achieved their goals despite Democrats holding leadership positions. Still, his critics have rallied around the issue and on Tuesday, activists in the gallery wore red shirts that read “BAN Democrat Chairs!”

The opening day of the session saw history made in the Texas House, as the chamber swore in its first two Muslim lawmakers: Suleman Lalani of Fort Bend County and Salman Bhojani of Tarrant County, both Democrats. Bhojani was sworn in on an 1806 Quran printed in Springfield, Massachusetts, the first ever printed in the Americas.

“As the first Muslim and first South Asian elected to the Texas Legislature, I’m excited to get to work in the 88th Legislative Session and fight for our community, our neighbors, and Texans across the state,” Bhojani said in a statement. “I’m honored to take this historic first step and work with my colleagues to strengthen our schools, create an economy that works for all Texans, and increase access to healthcare.”

In the Senate, Patrick, who won reelection in November for another four-year term, welcomed senators back to the chamber cheerily.

The chamber is expected to lean more conservative this year, after the retirement of veteran Republican legislators who sometimes were at odds with Patrick’s views on public education and local government, as well as the redrawing of a Fort Worth district that made it nearly impossible for incumbent Democrat Beverly Powell to win reelection. Phil King, a longtime Republican state representative from Weatherford, replaced her as the senator for District 10 in North Texas.

Also gone is Amarillo state Sen. Kel Seliger, a business-oriented Republican who had an independent streak and would sometimes tank legislation supported by Patrick. He is replaced by Kevin Sparks, who aligns with Patrick on social issues and who the lieutenant governor endorsed. Those changes mean Republicans have increased their majority in the chamber by one, with 19 Republicans and 12 Democrats to start Tuesday’s session.

With Democrats vastly outnumbered and few procedural rules to slow the GOP agenda, Republican lawmakers will have relatively easy glide paths for their legislation during the session. Patrick has given a rough outline of his legislative priorities that include reducing property taxes, securing the border and increasing the resiliency of the electric grid by increasing the production of natural gas in the state.

Patrick has warned that he would push the Legislature into a special session if additional work on the grid is not accomplished by the regular session’s end on May 29.

Kelly Hancock, a North Richland Hills Republican who appeared to be on the outs with Patrick last session after refusing to go along with his push to claw back billions of dollars made by energy providers during the 2021 winter freeze, was elected president pro tem of the Senate. Hancock, first elected to the Senate in 2013 after serving six years in the House, received a kidney transplant last summer after being diagnosed with a rare genetic kidney disease.

Senators lauded him as a “man of faith” and a workhorse legislator with expertise in various subjects, including veterans affairs, energy and business. Patrick embraced Hancock in a hug after he took the oath as president pro tem. In a speech, Hancock thanked his son-in-law, Greg Cox, for donating his kidney to him.

“I wouldn’t be here today if God hadn’t given me a family willing to donate a kidney so that I may be here,” he said. “As we start these 140 days, my friends, may we remember that — that we love one another as we accomplish and make the most of every opportunity.”

In a speech to the Senate, Abbott expressed unprecedented anticipation for the session to begin, saying lawmakers had a “once in a generation” opportunity to chart the course for the state because of its budget surplus.

“I have never been as excited about a session as I am about this session,” he said.

He touted lawmakers’ restrained spending of state dollars and business-friendly policies as reasons for the budget surplus. Importantly, the surplus also stems from an influx of federal funds given to the state to navigate through the COVID-19 pandemic and an increase in sales tax revenue that comes from Texans having to spend more because of rising inflation in the country.

The House and Senate have been at odds over important issues in recent years, but Abbott said he already saw a “coalescence about how to resolve the big issues we are facing.”

— Written by Zach Despart and James Barragan of The Texas Tribune is a nonpartisan, nonprofit media organization that informs Texans — and engages with them – about public policy, politics, government and statewide issues.