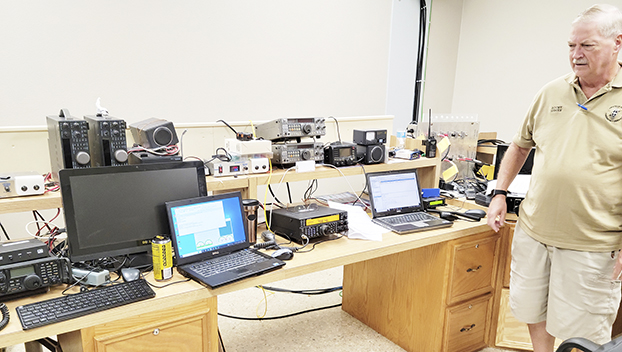 Rocky Wilson, ARES coordinator, walks inside the radio room of the Emergency Operations Center at the Orange County Convention and Expo Center on FM 1442. The equipment in the background includes various high frequency radios, laptops for digital use and FM radios. (Courtesy photo)

VIDOR — A 12-hour event to mark the 75th Anniversary of the Orange Area Radio Club’s membership in the American Radio Relay League takes place Jan. 27 at Claiborne West Park-Shelter No. 2 in Vidor.

Area ham radio operators will be at the Special Event Station, which is open to the public, at the park from 8 a.m. to 8 p.m.

The Club will double that length of time during a non-stop 24-hour period, also at the park, Jan. 28-29 as part of its annual winter Field Day, said Mike Manshack (AD5OG), assistant coordinator of the local Amaetur Radio Emergency Service.

The Jan. 27 anniversary event is primarily centered on club members contacting other radio operators around the world and confirming contact or receipt of a transmission through the collecting and sending of QSL cards.

These postcard-size cards are often colorful and collectible and contain a ham radio operator’s station and contact info. The use of “Q” codes, such as “QSL,” is the acknowledgement of a voice or Morse Code transmission.

“The winter Field Day is a friendly competition with other clubs in the U.S. and around the world and to make as many contacts as possible,” Manshack said. “Both events are to show local government officials and the public how to communicate in the event of a disaster. Also, there is a Field Day event that is held in June.”

Both annual events are also open to the public.

Manshack, who spends between 16 to 20 hours a week on his radio, said he has made contact with people in countries as far away as Europe and Africa.

However, that halfway-around-the-world distance pales to what Rocky Wilson (N5MTX), ARES coordinator, said is his longest distance contact.

“The most memorable one was a radio operator operating the KC4USV station at the McMurdo Station in Antarctica, which is about 8,885 miles from Denton, Texas, which is where I was living at the time in 1989,” Wilson said.

While the club’s affiliation with the ARLL, which boasts 161,000 members in the U.S, started Jan. 27, 1948, the club is slightly older, said Benny Rhoads (W5TYZ), a Little Cypress resident and also an ARES member.

Rhoads, who has been a ham operator for 55 years, said the club was formed almost a decade earlier around the 1938-40 time frame.

“It is going to be a big deal for us,” he said of the anniversary event. “It is a milestone that not a lot of clubs can claim.”

When asked if technology has changed for the good or bad for hams in the last 50 years, Rhoads said, “both.”

“It gives you more choices what mode to operate in,” said Rhoads who operates in CW (Morse Code) and in AM mode on the lower band frequencies.

The January events are part of more than 20 slated for this year.

Events that OARC and other clubs will participate in include: