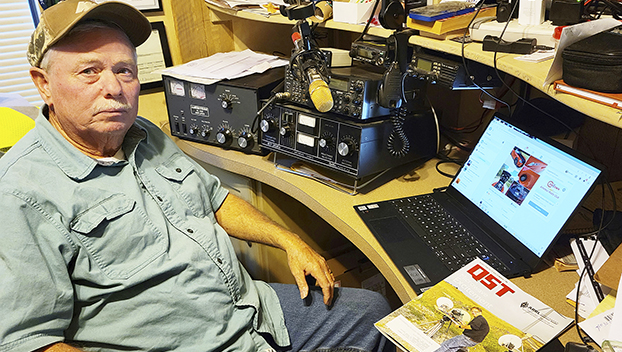 Mike Manshack, assistant coordinator of the local ARES, is seen here along with some of his equipment, including a TS 570 side band radio or high frequency antenna tuner, amplifier and FM 2-meter radio. (Courtesy photo)

Although the 2022 hurricane season is long gone, the static and crackle sounds never stop, say area ham radio operators who are frequently the only means of communication in times of crisis.

Members of the Orange Area Radio Club and Amateur Radio Emergency Service (ARES) continue to hold regular monthly meetings, hold Field Day exercises and educate the public on who they are and what they do.

“Hams have a long history of serving our communities when storms or other disasters damage critical communication infrastructure, including cell towers,” said Mike Manshack, Orange resident and assistant ARES coordinator.

“Ham radio functions completely independent of the internet and phone systems, and a station can be set up almost anywhere in minutes.”

For example, a ham radio operator can quickly raise a wire antenna in a tree or mast, connect it to a radio and power source and be able to communicate effectively with others, said Manshack, who is a member of the recreational group and ARES.

The emergency service group is composed of those who have voluntarily registered their equipment and call sign to keep others informed during hurricanes or other disasters as opposed to recreational radio operators.

“It’s kind of like a field goal kicker. They call us from the bench, and you have to be ready,” said Rocky Wilson, ARES coordinator. “We’re always behind the scenes, but ready, willing and able. We prepare for things we hope that never happens.”

“During and after Hurricane Katrina, there were many evacuees from the New Orleans area that inundated Texas counties as they moved westward, and Orange County was one of the first counties to receive them,” Wilson said. “There were seven Red Cross shelters set up in Orange and Newton counties.

“ARES radio operators were dispatched to the shelters to assist with shelter communications and provide auxiliary communication for the Red Cross.”

It served as a warmup of sorts as less than a month later, ham operators had to repeat their efforts.

Wilson and Manshack coordinated with Central and East Texas radio operators when the Space Shuttle Columbia exploded over Texas upon re-entry in February 2003.

Orange County Judge John Gothia said that even with the $14 million spent in the last several years on improving communications among cities, school districts and residents during disasters, ham radio operators are always there to help.
“Whenever we would have a loss of communications, we would use them to help communicate within the community,” Gothia said. “We’ve improved our infrastructure, so we don’t lose power and can communicate with citizens.”

Gothia said some of the improvements include upgrading the 911 system and boosting signal strength between towers.