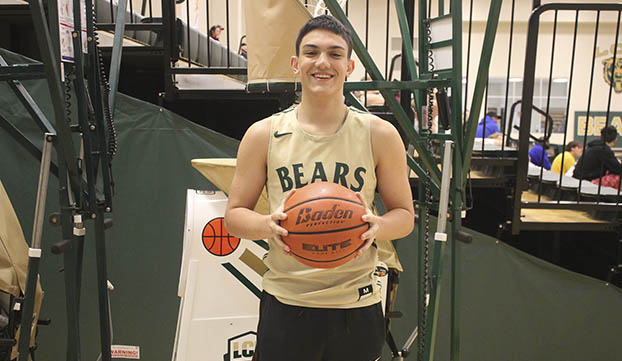 LC-M senior Noah Fuller does a little of it all to help the Bears push toward victories night in and night out. (Van Wade/Orange Leader)

LITTLE CYPRESS — Every competitive basketball team needs one player who is a “grinder.”

This player scraps on defense, fights for every rebound, dives on the floor for loose balls and puts his teammates in good positions to attack their opponents. And of course, he needs to know how to score.

Senior small forward Noah Fuller fits the bill in all those aspects for the Little Cypress-Mauriceville Bears and Coach Brad Jeffcoat.

Fuller earned his gritty reputation as a junior starter after being called up to varsity halfway through his sophomore season.

“I’m the type of player who loves to win and get my teammates going,” said Fuller. “I don’t consider myself a dirty player, but I love to mix it up, especially playing defense on a bigger opponent. I don’t mind having to get physical and I try not to let anybody go through me. One of my strengths is to help my team defensively and set the tone there. Defense is something you have to want to do. It’s not easy, but if you play good defense, it can lead to big wins.”

Jeffcoat has enjoyed the progress of his fiery senior leader.

“Noah is such a versatile player that helps us out, no matter what position he is playing,” said Jeffcoat. “He’s so integral on defense because he can guard all five positions. Same thing on offense, he can help us out at any spot. “

“In like doing the dirty work, whether it is hitting the boards or setting screens for my teammates,” said Fuller. “It’s a great feeling when you set a perfect screen and someone goes in for a layup or hits a big three-pointer. There is so much more to the game than just scoring.”

Fuller doesn’t mind putting it up when he gets his chances and has scored in double figures a bunch in his run as a Bears student athlete.

“I know I can score and when my team needs it, they can always count on me,” said Fuller. “I think I have a pretty nice drive game and I can pull up and hit from the outside, too.”

Noah is the type of player that brings it all together for the team and makes big plays, according to Jeffcoat.

He’s know for being very unselfish.

“We all play so well together because we’ve been together so long now,” said Fuller. “Da’Marion and I have played together since third grade in Upward Basketball and AAU Ball. I’ve played with Alantheon in AAU ball, too. Ben, he’s a great player that can fill it up. It’s been great to go out and play with those guys.”

Fuller and the Bears are looking to make a run to the playoffs again out of a rugged District 19-4A.

The Bears went 23-12 last season and advanced to the 4A Region III quarterfinals before bowing out to a powerful Houston Washington squad.

The Bears notched a 59-43 bidistrict playoff win against Huffman and a 64-46 victory over Navasota in the area round.

“Man, those playoff games were so awesome, especially that second win we got,” said Fuller. “The enthusiasm just grew for us in the offseason because we realized how much potential we had for this year. It was definitely something to build on. Our district is going to be tough, especially Silsbee. We want to compete with those guys, but we also have to realize that anyone can beat you on any given night if you don’t show up. We have to keep working hard and not let up against anybody.”

Fuller is ready to wrap up his final campaign in style.

“It’s all gone by so quickly but I’ve loved every step of the way,” said Fuller. “I love it when we have those big home crowds, especially with the student body. They get us fired up, and our gym is electric. They follow us well on the road and in the playoffs too. That’s what makes playing here so special, everyone backs one another in all the sports. I think we can do something really special and I think we have a really good run in front of us.”