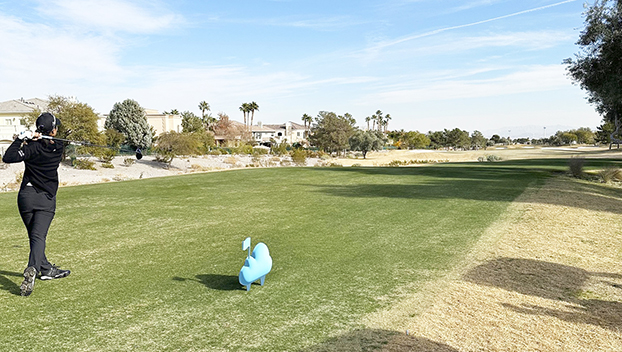 Shane Trahan got to participate in the second annual AWS Pro-Am at TPC Summerlin involving members of the PGA, LPGA and Champions Tours. (Courtesy photo)

You could call it a mind-blowing early Christmas present. Or you could portray it as a dream experience for the average golfer. Or you could treat it as a once-in-a lifetime opportunity that has left Shane Trahan’s friends and golf buddies green with envy.

No matter how it’s labeled, Trahan hit a jackpot on his recent trip to Las Vegas that you couldn’t win at a blackjack table or on a slot machine. He’s got the pictures, the golf swag and an indelible moment involving his son with a couple of PGA Tour stars to make the case.

“It was for sure an experience for the memory banks,” says the Southeast Texas resident who works in IT for the STF group.

A single digit handicap, Trahan had no clue what was ahead after signing up to be one of the roughly 50,000 IT professionals who would be attending the late November AWS (Amazon Web Services) Re:Invent Conference in Las Vegas. AWS, among other things, has become a partner with the PGA Tour on upgrading shot link technology.

According to an AWS post, this is the revolutionary impact it has made on the PGA Tour in the roughly 18 months of their partnership:

“The PGA Tour migrated nearly 100 years of video, audio and images dating back to 1928 to the AWS cloud. This shift enables new insights to be gathered, correlations made and source content made globally searchable and accessible for the first time to players, coaches, media, partners, fans and more.”

In other words, be prepared to have your head spinning with what pops up on future golf telecasts.

Trahan, meanwhile, hit the above-mentioned jackpot when his name was randomly selected to participate in the second annual AWS Pro-Am at TPC Summerlin involving members of the PGA, LPGA and Champions Tours. Ultimately, he would play 9 holes in the pro-am with Joel Dahmen, who was 15th on the Fed Ex Cup points list this past season, and 9 holes with Danielle Kang, the 16th ranked LPGA player.

Before the pro-am there would be swag – lots of swag — dinner with Max Homa, Tony Finau and rapidly rising star Tom Kim and separate Face Time calls between Homa and Finau with Shane’s son, Jason, who is a junior on the Port Neched-Groves golf team.

“Those two guys do not know how awesome it was for me as a dad to see how big a smile Jason had,” said Trahan. “So much about the pairings party and dinner was really special. I got to meet Michelle Wie and Jay Haas and had a chance in the dinner line to talk with Harry Higgs about how great he played last year.

“Over dinner, I asked Max and Tony for their best Tiger Woods story. Max talked about getting to play with Tiger at the British Open. Tony recalled being seated next to Tiger on the bus going to play the President’s Cup, how determined he was and what a killer instinct he displayed.”

Trahan also had a chance to ask about Southeast Texas’ two favorite PGA Tour players – Chris Stroud and Andrew Landry. He said all the feedback on the two PNG exes was totally upbeat.

One of his favorite moments in the pro-am came when he asked Kang for a chipping tip and how she responded. Kang, who has six wins, including a major on the LGPA Tour, pulled him aside and showed him a special tip taught to her by heralded instructor Butch Harmon.

Enhancing the golfing experience, there was a shot-link setup on the 16th through 18th holes, similar to what you would see at a PGA Tour event.

“That part was so cool,” said Trahan. “It made you feel like a pro.”

Also cool was Trahan’s interaction with freestyle rapper Kelly James, who AWS had stationed on the 17th hole. After securing some background, James belted out a custom rap about Trahan being an IT Director, PNG and Lamar University graduate and an over-the-top Texas Longhorns fan.

Sounds like Trahan’s going to be the leader in the clubhouse for years to come in those “can-you-top-this conversations” golfers like to have.

CHIP SHOTS: A week-long delay didn’t seem to bother Reese Williams in the USSSA Junior Tour Holiday Classic played Sunday at the Country Club of the Golden Nugget in Lake Charles. Reese, the son of 5 Under Golf Center CEO Austin Williams, fired a 74 to win Boys 12-14 by a whopping 14 shots . . .

Wet conditions led to the Monday Senior 50 Plus 2 ball Game at Babe Zaharias being played in a par 4 format. There was a three-way tie at 9 under on the front between teams captained by James Cady, Ron LaSalle and Glenn Judice. LaSalle’s team, which included Ted Freeman, Rick Pritchett and Charles Perez won the back with minus 10.

Format for the Wednesday Babe Zaharias DogFight was all points count. Winning with 29 points was the team of Cady, Joe Gongora, Rufus Reyes and James Johnson. There was a tie for second between teams captained by James Vercher and LaSalle.

Golf news should be e-mailed to rdwest@usa.net.