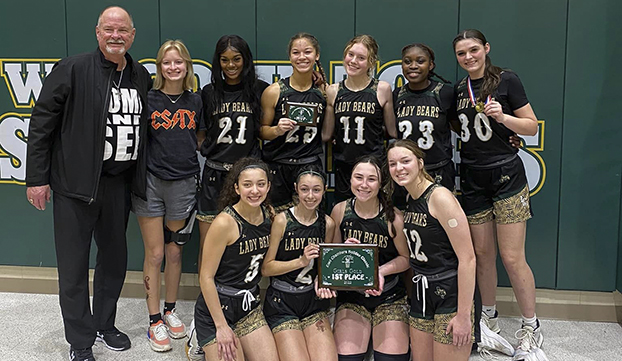 The LC-M Lady Bears celebrate with a team photo after winning five games to capture the Championship of the East Chambers Tournament. (Courtesy Photo)

The Lady Bars defeated District 19-4A rival Jasper 57-51 in the title game.

Keylie Washburn, who was named the Most Valuable Player of the Tournament, led he Lady Bears with 24 points against the Lady Bulldogs. Washburn averaged almost 20 points a game in the five tourney victories.

All-Tournament pick Mackenzie Clark had 10 points for the Lady Bears while Eden Frenzel contributed nine. Annabelle Fisher scored all eight of her points in the crucial fourth quarter.

In their first game of the tourney, the Lady Bears throttled Woodville 58-34.

Washburn poured in a game-high 24 points while Clark and Frenzel tallied 10 points apiece.

The Lady Bears managed to squeeze out a tight 41-37 decision against Liberty. Washburn led the way again with 20 points while Clark and Frenzel chimed in with nine points apiece.