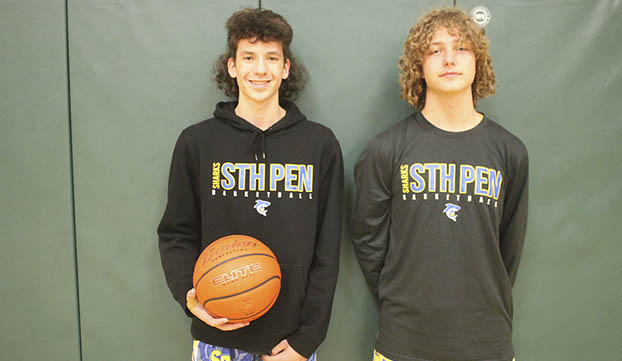 Australia Southern Peninsula Sharks player Zac Kent (left) and Will Sinclair (right) are having fun playing in the LC-M Tournament and have thoroughly enjoyed their stay in America by playing in tournaments. (Van Wade/Orange Leader)

There is a new team competing in the event this year and they are called the Southern Peninsula Sharks.

It’s high school players from Australia. They are getting the opportunity to find out what American high school basketball is all about. It also gives them nice exposure for possible college opportunities down the road.

However, the fun they has brought forth lasting memories for everyone involved. They brought two teams, a varsity unit and a junior varsity unit.

“We are not associated with the Australian National team at all but we do have kids that would love to play for our country one day,” said Australian coach Ben King. “This is an experience of a lifetime for most of the kids. We’ve ventured over 9,000 miles together to get here. It truly helps us grow as a team and we’re like a well-rounded family. They really have a fun time meeting and gelling with players from other teams.”

Shark forward Zac Kent has been infatuated with the trip.

“We’ve been able to meet so many great people and the food here is simply amazing,” said Kent. “We don’t have a lot of fast food in Australia and they have some really nice dining places too. We relax by watching American movies in our hotel rooms.”

“We’ve been in America for two weeks now and we’ve learned so much about the country and how nice the people are here,” said Sinclair. “We are alike in so many ways. We like to mingle with the guys on other teams between games and get to know them. It’s really a fun trip but it’s just as much of a learning trip as well. We’ve had good, good, good times here.”

The team competed in the Schulenberg Tournament last week and went a perfect 4-0.

There are several Australian teams competing across America, both boys and girls.

“We have a travel agency called Showtime Basketball,” said King. “They help us find tournaments across America. They reached out to and we got connected with Coach Jeffcoat and the rest is history.”

Jeffcoat is thrilled to have the young Aussies in Bear Country.

“We’re super happy to have them here and they are so nice and the kids are so great,” said Jeffcoat. “They all have such great personalities. They know and play the game well. When they leave, I hope they remember us for being generous hosts.”

King feels the Sharks have made some nice adjustments to the American game and rules.

“There are definitely several rules that our different from what we play in Australia but the players have really settled in and are accustomed to them after playing a few games,” said King. “The more games we get, the more we can understand the way the rest of the world plays the game. What it really comes down to is basketball is pretty much the same game and the same fundamentals every where you go.”

The biggest difference we realized early was the three-point line, it’s so much closer to the rim here in America,” said Kent. “When we first arrived at our first tournament, we were all trying to hit those short three-ball shots and it’s not as easy as it looks.”

The biggest difference for me was the pace of the game,” said Sinclair. “It’s much slower here in America. Back home, we are always pushing it up and down the floor. We’ve learned how to play better defense here, because you have a lot more patient.”

The Sharks will be rewarded with a trip to Disneyland before venturing back home to Land Down Under.

The Sharks will return to prepare for their upcoming season, which starts in March.