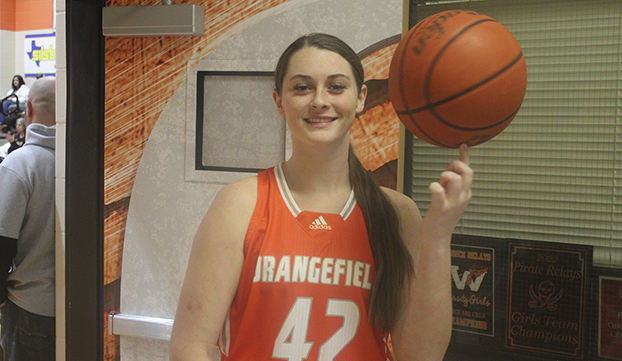 Orangefield junior post player Greenlea Oldham has not only upped her game in the paint, she’s proudly accepted a leadership role for the Lady Bobcats. (Van Wade/Orange Leader)

ORANGEFIELD – After being a solid contributor on two Orangefield Lady Bobcat teams that made the playoffs her freshman and sophomore year playing with senior-oriented teams, junior Greenlea Oldham is making a nice mark not only filling the stat sheet but as a leader as well for a young Lady Bobcat team this season.

Oldham has turned into a powerful force inside, racking up several double-doubles early on in the season.

She isn’t afraid to flex her muscles inside, that’s for sure.

Oldham certainly proved her might in the Orangefield Tennison Tournament this week. She bruised her way for a game-high 20 points and 18 rebounds in a 47-44 victory over the Evadale Lady Rebels. Evadale is currently ranked No. 7 in the latest Texas High School Girls Coaches Association Class 2A state poll.

“Double-doubles are definitely something I shoot for every game,” said Oldham. “I’ve always liked to crash the boards and get a bunch of rebounds and getting those blocked shots. Rebounding is not easy, it’s something you constantly have to work on, blocking out the right way. Rebounding is such an important and underrated part of the game. When you rebound well, it leads to so many opportunities for the team.”

Oldham has definitely seen her scoring go up since she was a freshmen. She has nice range on her jumper and has some smooth moves in the paint.

“I’ve worked so hard on my up-and-under move,” said Oldham. “I’ve gotten so much better at it and developing that has really given me confidence. If I do miss with it, it’s a shot which allows you a good position and you get a rebound and put it back in.”

Oldham is cherishing her leadership role and is a captain, despite being just a junior still.

“I was fortunate to play with a couple older senior classes my freshman and sophomore years and they really helped me improve as a player and were constantly pushing me and helping my game,” said Oldham. “This year, we probably have one of the youngest teams the school has ever had with several freshmen on the varsity. I want to be a teammate they can turn to when they need advice or working on improvements to their game. They really like to be guided and I am almost glad to help.”

“Coach Girola has really came here and adjusted well to us because we are such a young team,” said Oldham. “He is really patient with us and every time we play, I feel like we are getting better and better. It’s all about getting that experience.”

The Lady Bobcats stand at 1-2 in District 22-4A play and will look to continue to make strides when district play cranks up for good in January.

“I think we can compete with everybody in our district,” said Oldham. “We felt like we let one get away in a close loss to Buna and we will be ready for that one when it comes around again. Our district has some good teams but if we keep improving, I think we can make the playoffs again.”

“We beat Liberty in the first round that year and that was so awesome,” said Oldham. “Playoffs are what it is all about and one goal is to make it to the playoffs all four of my years here.”

She was a key contributor on the second-place, playoff-qualifying volleyball team in the fall. She started on the softball team last season and is a standout trickster, throwing the discus and the shot put.

“Volleyball season was a blast and it was a really good run, just wish we could have went a little further,” said Oldham. “Spring will be bus for sure with softball and track. Right now, though, I’m going to do my best to help get us in the basketball playoffs. Basketball has always been my favorite sport.”