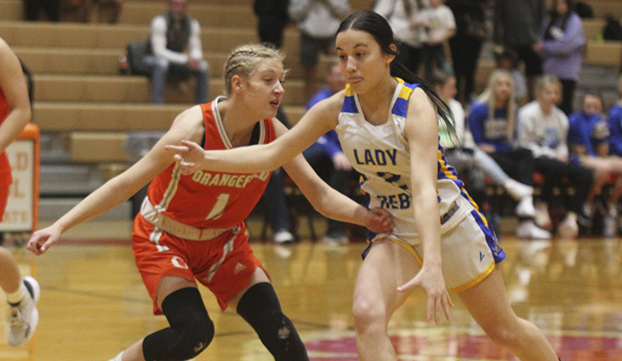 ORANGEFIELD – They may be young, but the Orangefield Lady Bobcats continue to show tremendous improvement for first-year head basketball coach Eric Girola.

That was never more evident during their very own Tennison Tournament when the Lady Bobcats turned back the Evadale Lady Rebels 47-44.

The Lady Rebels checked into the game ranked No. 7 in the latest Texas High School Girls Coaches Association Class 2A state poll but the Lady Bobcats fought and scrapped their way to a nice victory.

The Lady Bobcats received a huge effort from junior post Greenlea Oldham. The Lady Rebels had no answer for Oldham inside as she powered her way to a game-high 20 points to go along with a game-high 18 rebounds.

The Lady Bobcats led 13-8 at the end of the first quarter with Oldham scoring nine points in the period.

Guard Mallorie Dougharty kept the Lady Rebels close. Dougharty buried three three-pointers in the first half and helped get Evadale to within 24-21 at the half. Dougharty finished with a team-high 16 points.

The Lady Bobcats expanded their lead to 38-30 by the end of the third quarter. Brooklyn Waggoner scored all six of her points for the Lady Bobcats in the quarter, burying two three-point missiles.

Dougharty and fellow Lady Rebel guard Kelsin Bruce teamed up for 12 points in the fourth quarter as Evadale came all the way back to tie things up at 40-40. Bruce finished with 12 pints.

However, the Lady Bobcats made key defensive plays down the stretch and got seven big points inside by Oldham to hold back the Lady Rebels.

The Lady Bobcats did a number on the boards against the Lady Rebels, outrebounding them 42-23. Orangefield did finish with 21 turnovers while Evadale had just 12.

Madison Cotton had eight points and a team-high nine rebounds for Evadale while Addison Henderson had seven boards.

It was a nice rebound win for the Lady Bobcats, who dropped a tight 40-8 dcision to Vidor in an earlier tourney game.

FRANKLIN – The Orangefield Bobcats snagged two big wins at the Franklin Tournament on the first day of action.

The Bobcats went on a 18-4 scoring spurt in the fourth quarter.

Pete Ragusa had a huge outing for the Bobcats, scoring 32 points and adding four assists and four steals. Ragusa connected on 12-of-24 shots and made three three-pointers.

In the win against CC London, Ragusa remained hot, scoring 28 points to go along with three steals.