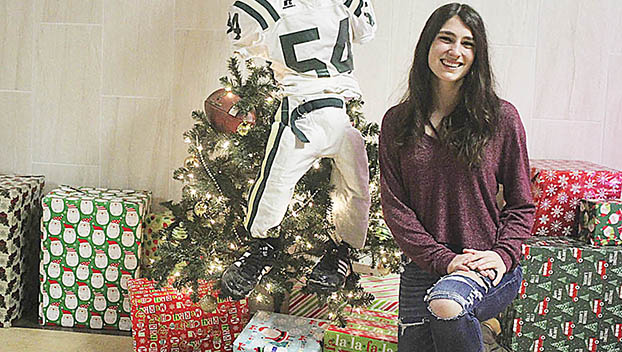 LC-M senior Mariah Ammons is having a blast enjoying her last year involved in clubs and sports for the high school. (Van Wade/Orange Leader)

LITTLE CYPRESS —Little Cypress-Mauriceville senior Mariah Ammons is a “stickler” for keeping her grades up while navigating through entertaining ways of brightening the lives of everyone around.

She is a member of the National Honor Society, the Interact Club, Bear Believers, helps with Team Force and plays volleyball and soccer.

“I’m just a believer in helping people out, whether it is through Christ or any means,” said Ammons. “If I can be there to brighten a person’s day, I’m going to do it to the best of my ability. I always try to be a positive person and help lead the way in every way possible.”

Being a part of the Interact Club is uplifting, from small projects to big projects, she said.

They have sold bracelets to raise money struggling families in Guatemala.

They have raised funds for a Cancer cure for St. Elizabeth Hospital during football games.

One of the best moments this year was making dog blankets for area animal shelters.

“It’s such an awesome group to be in, and faith has always been so important to me. It guides me in everything that I do,” said Ammons. “We organize pep rallies on campus. We’re not only Bear Believers in our faith, we are Bear Believers when it comes to being LC-M fans. We’ve been able to raise funds for church groups that go on missions to Asia. We like to do things that touch a lot of people’s hearts.”

Ammons is also heavily involved in her church activities through the Youth Praise Band.

She loves to sing.

“Our church does a lot of positive things in the community,” she said. “We go out and feed people and have canned food drives. We love going to nursing homes, visit the people there and work on things like their garden to help lift their spirits up. 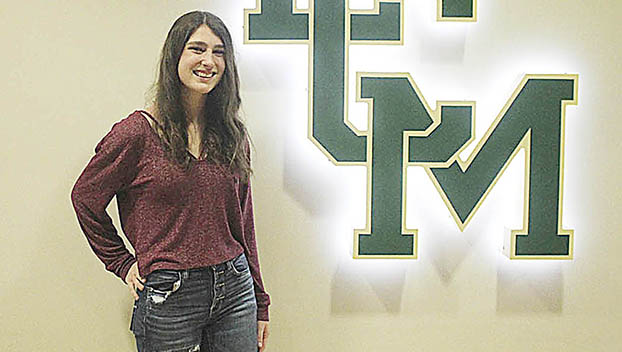 LC-M senior Mariah Ammons is a positive influence across the LC-M campus, whether it is being a key leader in clubs or on the fields of play. (Van Wade/Orange Leader)

Speaking of singing, Ammons has stepped in and has lifted everyone up prior to volleyball home games by singing the national anthem, said LC-M Activities Director Stacey Smith.

“But those are the type of things she does 24/7,” said Smith. “If you need a go-to person for anything, Mariah is one we can certainly depend on. She’s such a positive person, and that has so much to do with her faith. We just all simply love her around here.”

Ammons has had excellent parents help steer the way in James and Erika Ammons.

He dad has taught her how to be kind to people and to sacrifice yourself to help make it a better world.

“He has been in the military for a long time and he knows what sacrifice is all about,” she said. “My Mom is such a busy person, as far as going that extra mile to help people out. God is the center of her life. They are both so influential to my life.”

Ammons is proud to share some of her time with the LC-M Team Force kids, enabling them to thrive in their environment.

“I love engaging with those kids and boosting their spirits, whether it is reading to them or playing in activities with them,” said Ammons. “We organize kick ball games with them, and they have a blast. We took them to Lions Den Park for the carnival and helped them with the rides. The smiles on their faces are priceless.

“Not to brag much, but I think our school has the best program for those great group of kids. I like to help teach them but in reality, they teach me a lot, too.”

Ammons was thrilled to be inducted into the National Honor Society last year.

It’s always been big for her to keep up the grades. It takes a lot of but is well worth it.

“I love English and I love writing essays,” said Ammons. “I enjoy reading on my down time. I just like writing in general. My mom thinks I’m always writing a novel when I’m home. Now math, let’s not go there. I just want to get past the subject the best I can.”

Ammons completed the volleyball season, and the Lady Bears went 10-2 in district play to earn the second-place playoff seed. Ammons made the All-Orange Leader Volleyball Team as a senior.

“We really started to gel when district started after having so many new faces to start the seasons,” said Ammons. “10-2 in district was pretty good, I just wish we could have defeated our rival Bridge City, but they were awesome.”

Ammons is turning her attention to the soccer field.

She has played for 13 years.

She also plays select ball throughout the year.

“Here at LC-M, we have a strong tradition and we want to continue that this year,” she said. “We lost several really good players to graduation but we have some young ones coming up that are really good. I know I’m going to have to be one of the players that steps up in a leadership role.”

Soccer coach Lauren Martin is elated to have Ammons, calling her a go-getter in everything she does and tries to accomplish.

“She’s a vocal leader and also provides leadership by doing her thing, which is always being positive and inspirational,” said Martin. “When she enters a room, or a field, or a gym, she immediately brightens the environment around her.”

Ammons would love to continue to play soccer at the college level.

“I want to attend LeTourneau University and become a Child Life Specialist,” she said. “I would like to work around hospitals and just help families and be there for them when anything comes up. I want to be a guiding hand to help them through difficult and happy times.”