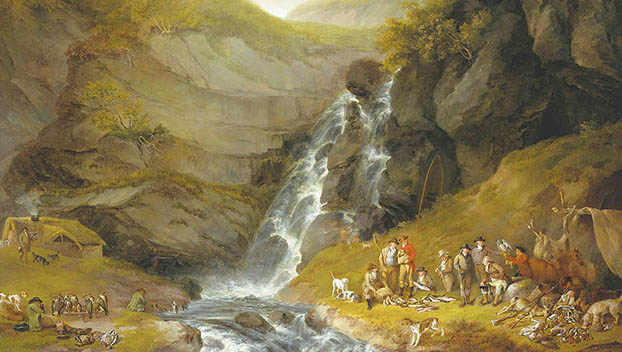 The painting “The Display on the Return to Dulnon Camp, August 1786,” conveys the theme of the Nobel Pastime exhibition. It depicts the hunting adventures of Col. Thomas Thornton. Sawrey Gilpin painted the landscape in this work. Philip Reinagle depicted the people and the animals. (Photo courtesy Stark Museum)

The Stark Museum of Art is hosting “A Nobel Pastime: Hunting Pictures from the Sarah Campbell Blaffer Foundation” through early April.

“This exhibition features a subject that is familiar to Stark Museum attendees – that of hunting, but from a different perspective,” said Sarah Boehme, curator. “We are very grateful to the Sarah Campbell Blaffer Foundation for generously sharing this extraordinary collection and organizing this loan exhibition so that the Stark Museum of Art could present these works of art to our audience.”

The hunt has been a pervasive theme in western art and literature since the time of ancient Greece.

The sport, often approaching the status of ritual, was generally heavily regulated and restricted to the nobility, with violators subject to strict penalties including, in some cases, death.

“A Noble Pastime” includes 16th- to 19th-century representations of various aspects of the chase, such as hunting expeditions, game pieces, and portraits of hunters as well as animals. This exhibition seeks to illuminate various hunting methods, to underscore the role of the hunt as an exclusive pursuit in early-modern European culture, and to emphasize the use of hunting imagery as a conscious tool for fashioning one’s self-identity.

Artists include Jacques Callot, Willem van Aelst, George Stubbs and many other French, Dutch, British, German, and Flemish artists. Portraits of hunting dogs and a hunter’s horse show the importance of animals to the enjoyment of the hunting adventure and to the success of the hunt.

Works in the exhibition feature falconry, the use of trained hawks to hunt prey. Educational additions to the exhibition will include an audio tour and a scavenger hunt.

The exhibit is on display through April 8.