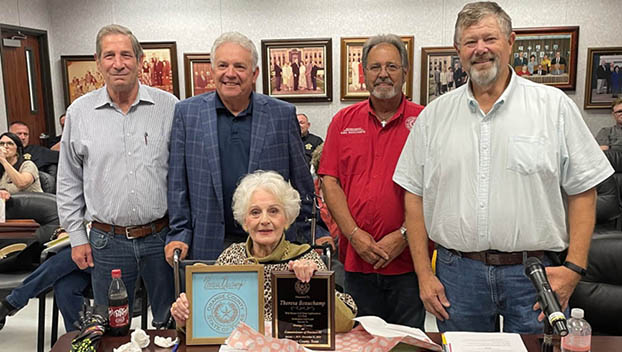 Beauchamp is retiring after four years on Orange County Commissioners Court, but her career also included 12 years serving on Orange City Council and 40 years in education, as a teacher and administrator.

“We have enjoyed Mrs. Beauchamp and will miss her being on the court,” says John Gothia, County Judge. “I think she served her citizens well and I think she gets to go and enjoy her retirement now.”

“I worked with the best commissioner’s court that I could have ever worked with,” Beauchamp says.   “We not only worked together but were friends and respected each other’s opinions. Everybody brought to the table expertise. I’m going to miss all of them, the people at the courthouse and everybody down there that have become my friends. They do a good job. I’m leaving on a good note.”

Beauchamp is also very proud of what she accomplished while serving.

But that wasn’t Beauchamp’s only accomplishment.

The county is also no longer in debt.

Beauchamp says she really enjoyed being able to meet the residents of her precinct and assist in their needs: “I returned every phone call that I got.”

Beauchamp says during her term she was able to get to know a lot of people in the area from Mauriceville to Pinehurst.

“I made lots of wonderful, lifelong friends,” she said.

When Beauchamp was asked about her biggest challenge as Precinct 2 commissioner? Time.

“It’s not a free ride, let me assure you. But it’s very rewarding. Anybody who wants to get into public service, I would highly recommend it. We need good people working for the city and for the county. “

For now, Beauchamp is focused on recovery after a hip injury, then she’s off to new things.

“I’m going to start getting my house back in order and I want to garden again and get my yard pretty again. I want to spend time with my friends and get back with my fun organizations and be of service there and have fun … it’s time!” Beauchamp says. “I have three granddaughters in Houston that I never get to see, and now I’m going to see them a whole lot. I’m 76 years old and I know when it’s time to go home.”

Beauchamp was recently presented with a plaque in appreciation of her time on the court. Last year Beauchamp decided she would not run again for her Precinct 2 seat.

Commissioners Robert Viator, Kirk Roccaforte, Johnny Trahan and Judge John Gothia also gave her a plaque with her signature on it for all the times they would kid her about how long it took her to read and sign her name on documents.

Gothia added, “It was an honor and privilege to work with her.”

Beauchamp followed her mother, Marcelle Adams, who in 1987 was the first female ever elected to serve on the court.

After the county’s business was taken care, all in attendance ate cake at a reception for her.

Chris Sowell will replace Beauchamp in January. He won the Precinct 2 seat back in March.