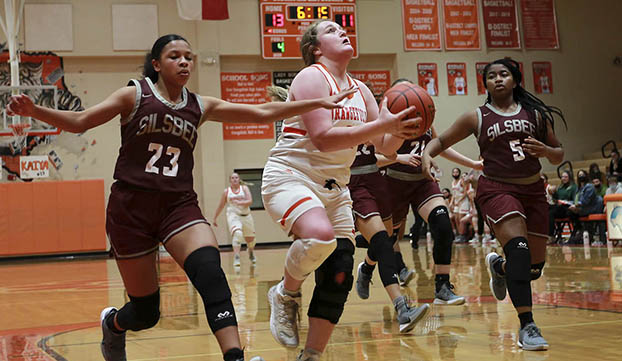 ORANGEFIELD – The Orangefield Lady Bobcats will welcome in five teams to participate in the always fabulous Tennison Tournament next Tuesday and Wednesday at Bobcat Gym.

Teams that will participate will include the host Lady Bobcats along with Vidor, Port Arthur Memorial, Warren, Cleveland and Evadale.

“It’s always a great tournament and we look forward to hosting everyone,” said first-year Lady Bobcat coach Eric Girola. “It’s such a great tradition every year. Everyone is going to get four games in and it keeps everyone fresh with nothing but district play left starting in January.”

All of the Orange County teams will also be involved in tournament play next week.

The West Orange-Stark Lady Mustangs will travel to Buna Tuesday in a non-district affair.

The Orangefield boys will be competing in the Franklin Tournament Tuesday through Thursday.

The Little Cypress-Mauriceville Lady Bears will head to Winnie to participate in the East Chambers Tournament Tuesday through Thursday.

The Bridge City girls will play in the Buna Tournament Thursday through Saturday.

The LC-M boys will be hosting their LC-M/International Paper Tournament Thursday and Friday at Hargrove Gymnasium with the Bridge City boys also in the tournament.