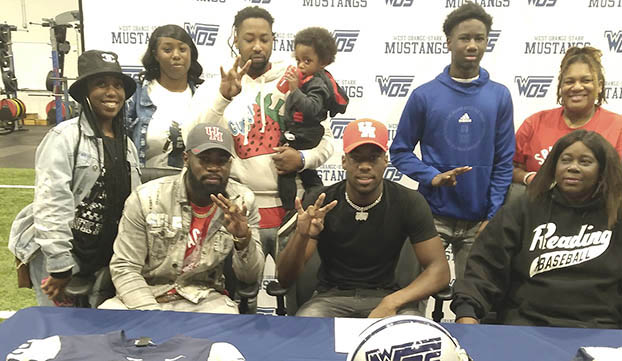 West Orange-Stark’s Jamal Shaw signed with The University of Houston in front of family and friends Wednesday. (Van Wade/Orange Leader)

WEST ORANGE – After shining as a two-way player on defense and offense for the West Orange-Stark Mustangs the last three seasons, Jamal Shaw is taking his talents to the University of Houston to play for the Cougars.

Shaw signed with Houston Wednesday in front of family and friends at the Thompson Strength and Conditioning Center. Shaw will play defensive back for the Cougars.

“I saw a University of Houston game as a freshman and fell in love with the program then,” said Shaw. “I’m so looking forward to being a Cougar. One of the best things about it is that I’m not too far away from my family and friends, just an hour and a half or so. It’ll be great for everybody to come see us play.”

“Going to Houston has been a dream of his for awhile and to see it come to a reality, that’s so awesome,” said Hickman. “He was a tremendous two-way player for us. The talent is so there, especially when you watch film of him. He’s going to be an asset for the Cougars.”

Mustangs assistant coach DePauldrick Garrett said Shaw has everything needed to succeed, from his work ethic to his grades.

“He’s just what you want from a student-athlete,” said Garrett, who coached Shaw at running back the last few years.

“Jamal, he wanted to tote the rock more and he got some opportunities. It may not have been as many as he wanted, but he finally realized how much he could help us on both sides of the ball. We watched him grow from about 5-9 as a freshman to now 6-3 as a senior. His body-type is perfect for a Division I defensive back. He has the range to move all over the field. Houston is getting a good one.”

Shaw is enrolling at Houston in January. He captured all of his credits needed last semester to graduate as a Mustangs standout.

“The kid was doubling up on classes and still working hard for the Mustangs, too. That exemplifies what type of kid he is,” said Hickman. “I’m excited for him. He gets to get in there, get settled early and learn what the campus life is all about.”

Shaw was eager to get on the college path.

“It was tough, I doubled up my social studies classes and my English classes last semester,” said Shaw. “I’ve always done pretty well with my grades, but that was tough. I powered through it, plus it gave me a good start as far as college classes go, because I know I will be studying a lot when I get to Houston.”

Shaw will also have the pleasure of playing with former Mustangs center and current Houston offensive lineman Demetrius Hunter Jr., who will be heading into his sophomore season.

“It’ll be great to have Demetrius there, showing me the ropes, the campus and what to expect,” said Shaw. “We are both Orange boys, so we can ride back and forth together when we need too. We’re both ready for the upcoming season and we’re looking to represent the 409 well.”