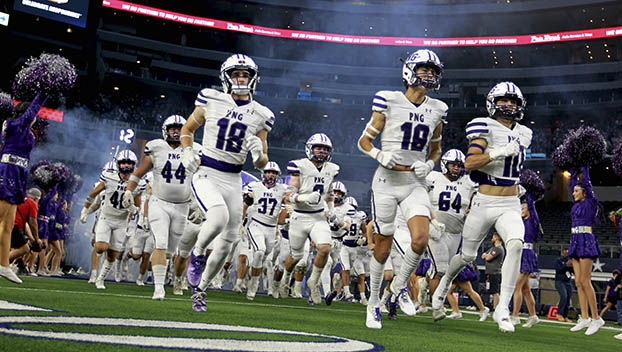 Another tremendous Texas high school football season concluded Saturday, and another great show was put on by the folks at AT&T Stadium in Arlington as 12 high school champions were crowned.

It was great to watch the Port Neches-Groves Indians put up a fight before bowing out to a big and physical Dallas South Oak Cliff team that just wore down our boys from the Golden Triangle in the second half.

Indian Nation and the rest of Southeast Texas should be so proud of the group in purple and white.

During the State Championships I become a “couch potato,” watching 16- and 17-year-olds go at it in front of their faithful fans, and the spirit in the crowds are like no other state in the nation.

The Class 6A and Class 5A games are fun to watch, but I’m so partial to watching the “little guys” play. Those in Class 4A on down.

It was nail-biting to watch China Spring kick a field goal as time expired to knock off Boerne 24-21 in the 4A Division I game. I was pulling for the Cougars, especially after watching them down our West Orange-Stark Mustangs in the postseason in 2020 and 2021.

I saw Franklin down our Orangefield Bobcats a few seasons back, and they too, won on a last-second field goal to topple Brock 17-14 in the Class 3A Division I game.

There is just something about watching those smaller school go at it.

Generally, Texas football fans are always ready to cheer on the biggest, after all, we are the second biggest state in the Union. Whether it is the Cowboys, Texans, Aggies, Longhorns or Horned Frogs along with those usual Class 6A and Class 5A juggernauts, the “big boys” is what it is usually about.

Even setting aside Texans’ love for big, it’s easy to see why people gravitate toward the biggest classifications — Texas high school football in Classes 6A and 5A is superb. The athletes and coaches are so talented and the action is so spectacular that you can often forget that most of the players can’t vote yet.
But here’s the thing, there’s a whole other world out there. If you’re only paying attention to the largest classifications of Texas high school football, you are missing out on so much more than you know.

High school football in Texas below the 5A level may not get the headlines that the big schools do, but it’s certainly not for lack of entertainment. It’s got everything you could possibly want in a gridiron experience.

Looking for great coaching? Some of the finest coaches in Texas — and, therefore, the nation — master their craft at places like Carthage, Canadian, Crawford and Calvert.

There are so many inventive strategies at the lower classification. You’ll see everything from the Air Raid to the Slot-T, from pro style to wholly original offensive schemes if you look around the small-school ranks enough.

Looking for superstars? They may not have as many FBS-bound players as the big schools but the small schools have players you have to see to believe.

But small-school Texas high school football is a culture unto its own, where strategy must overcome a lack of depth, where playing both ways isn’t rare, but a necessity, where blue chips are a little more rare but blue collars are not.

If you’re a 6A and 5A fan, expand your horizons, and make sure you’re taking in the sport in its complete majesty.

And last but not least, those small-town kids are revered by their communities. Many of them certainly walk around and almost everyone knows their names. They are greeted by fans at the local gas stations, local dining establishments and churches.

The family atmosphere, to me, is what makes it so great. Not so much at the upper classifications.

That’s what has made covering our local kids at WO-S, LC-M, Bridge City, Orangefield and Vidor so special. For the most part, each of our Orange County schools are tight-knit and full of support and certainly not afraid of rooting for another county team if they go far.

Until next season folks, it will be here faster than we all think.