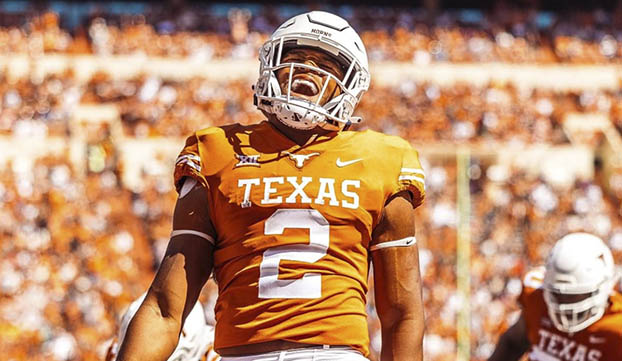 The Port Neches-Groves native and former four-star quarterback from the Class of 2019 is one of the leaders on the Texas Longhorns football team. Johnson has 2,079 career rushing yards on 372 carries with 24 total touchdowns (21 rushing, two receiving) during his time on the Forty Acres.

The fourth-year running back converted from quarterback his freshman year and has played in 35 career games with four starts. Johnson was named to the 2022 preseason watch list for the Doak Walker Award, named a fourth-team All-Big 12 Preseason selection by Athlon Sports in 2021, and a two-time Academic All-Big 12 First Team selection (2020-21).

Johnson was highly decorated out of high school. He was one of five finalists for the 2019 Watkins Award, presented each year to the nation’s top African American male high school scholar-athlete, in addition to an all-state and three-time all-district player.

Johnson finished as Port Neches-Groves’ all-time leading passer with 7,710 yards and second all-time leading rusher with 4,900 yards, notching 85 total touchdowns. He was selected to the 2019 Under Armour All-American Game. He was chosen MVP and unanimous first team in District 12-5A II in 2018.

The Longhorns running back has been as instrumental as anyone around the team, just ask those around him.

He just means so much to this program, his leadership,” noted Longhorns junior All-American running back Bijan Robinson. “Just him as a person and how he handles himself. That’s what it means to be a great football player but a great person.”

“I’ve enjoyed every bit of it,” said Johnson. “The challenges. Every aspect of it. Just from my story and how my career played out through my time being here up until now has been a lot of ups and a lot of downs, but I’m grateful for it all.”

The Texas football team often talks about how important their player leadership is, but when they have to point to a specific leader, it’s always Johnson. That’s no different with the head coach.

“When you talk about what is a Texas Longhorn football player, in my mind I think of Roschon Johnson because he is a selfless player,” said Longhorns head coach Steve Sarkisian. “He is not the star or starting running back at the University of Texas, but yet that doesn’t ever get in the way of his work ethic.”