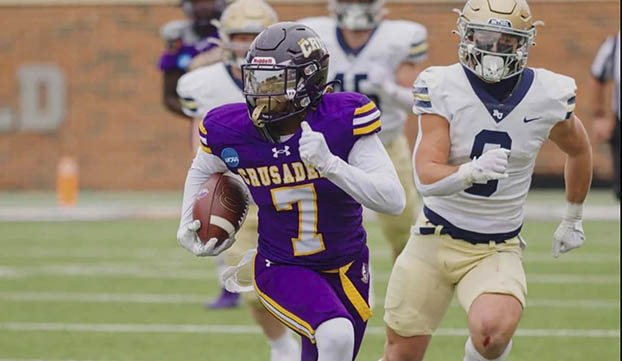 BELTON – What a run it was for former West Orange-Stark standout K.J. Miller at the University of Mary-Hardin Baylor.

Miller, who holds many records for the Crusaders, wrapped up his final campaign by being named to the Associated Press Division III All-America First Team Offense.

Parker had 54 total tackles on the season with a team-high 19 tackles for loss (85 yards). He added 9.5 sacks for a loss of 61 yards and four total quarterback hurries. Parker also had three pass breakups, one fumble recovery and two forced fumbles.

Dunk a senior from Austin, ranked fifth on the team with 62 total tackles. Dunk had 45 solo takedowns with four tackles for a loss of eight yards. He added two interceptions and four pass breakups on the year.

Kyle King, Ethan Ruckman and Anthony Avila were all were all named to the Associated Press Division III All-America Second Team Offense.

King, a senior quarterback from Milano, set new season records for passing yards (3,676), completions (260), attempts (399) and passing touchdowns (41). He averaged 262.57 yards in the air with a 172.95 quarterback rating on the season. King added 211 yards rushing with one touchdown on the ground. He recorded 11 games with 200+ yards passing and earned AFCA Second Team All-America, D3football.com First Team All-Region and First Team All-ASC. King was also the Offensive Player of the Year for both the ASC and D3football.com Region 3.

Ruckman, a senior from San Antonio, led the Cru offensive line with a 95% grade during the regular season. He had 54 pancake blocks with one sack allowed in 282 attempts. Ruckman was also named ASC Offensive Lineman of the Year, First Team All-ASC and First Team All-Region. Ruckman helped the Cru to 2,664 rushing yards this season with just 14 sacks allowed.

Avila, a senior kicker from Troy, ranked 56th in the country with 7.7 points per game scored this season. He kicked 15 total field goals with a 44-yard long and was a perfect three-for-three from the 40-49 yard range. Avila added 63 extra-point kicks for a total of 108 points scored.

UMHB finished the season 12-2 and advanced to the NCAA Division III Semifinals for the eighth time in program history.