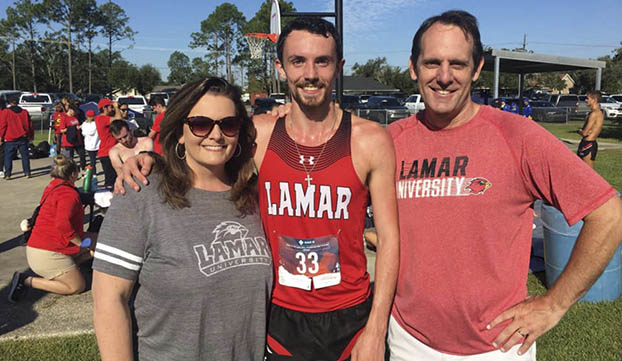 He also received a special accolade recently, being named a First Team member of the Southland Conference All-Academic Team.

Recording a perfect 4.00 grade-point average as a computer science major, Peveto set new personal records in both the 6K (18:05.63) McNeese Opener where he finished fourth and in the 10k South Central Regional meet (321:37.4) where he took 27th place. By finishing in sixth place in the SLC Championship with a time of 24:11.0, he earned Second Team All-Conference honors.

Other Cardinals joining Peveto on the SLC All-Academic Team were Yasmin Austridge, Nia Clatworthy, and George Wheeler on the First Team and Conor Smith on the Second Team.

Lamar’s five recipients were the most among all SLC schools on the list.

To be considered for all-academic honors, an athlete must hold a minimum 3.00 cumulative grade point average in the semester prior to the championship, completed one full academic year at the institution prior to this past season, and participated in at least 50 percent of the team’s competitions during this past season.

This honor is voted upon by a head coach, sports information director, and an academic/compliance staff member from each school. In addition, student-athletes of the year are voted upon by an award committee, which includes one administrator from each member school. Voting for one’s own athletes were not allowed.