Southeast Texas’ hopes for a state title come up one game short; see the details 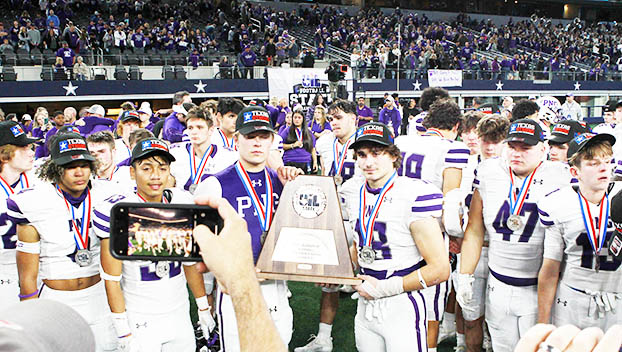 ARLINGTON — Port Neches-Groves’ quest for a state title came up one victory short.

It certainly wasn’t for a lack of effort or skills from the Indians, who held a halftime lead.

A massive second half by Dallas South Oak Cliff was too much for PNG to overcome as the Bears nabbed their second consecutive Class 5A Division II state title with a 34-24 victory over the Indians at AT&T Stadium Friday night.

It marks the end of a superb season for the Indians and first-year head coach Jeff Joseph. PNG won 11 straight games before bowing out in front of a huge crowd of purple faithful in “Jerry World”.

The Bears finished with 339 total yards and limited the Indians to 244 and just 65 in the second half.

Junior running back Isaiah Nguyen led the Indians arsenal with 159 yards on 22 carries. He was just the third player to rush for more than 100 yards against the Bears all season.

Indians quarterback Cole Crippen was 2-of-8 for 70 yards, a touchdown and an interception before leaving with a shoulder injury late in the game.

Receiver Shea Adams stepped in at quarterback and completed 4-of-7 passes for 41 yards and a touchdown and rushed for 40 yards on 10 totes. Chance Prosperie hauled in four passes for 55 yards.

The Bears capitalized on Indians miscues on three occasions, snagging two safeties and had an interception return for a touchdown.

The Indians led 17-12 at the half before the Bears dominated the last 24 minutes.

On the Bears’ first series of the second half, Little hit receiver Ricky Green on a 55-yard bomb over the middle that got all the way to the Indians 17.

The PNG defense rose up in a big way and forced the Bears to settle for a 30-yard Diego Varela field goal with 10:18 in the third to make it 17-15.

The Bears tied it up after a PNG miscue. A punt snap sailed over Crippen’s head and rolled all the way to the PNG end zone. Crippen did the right thing, grabbing the ball and tossing it out of the back of the end zone for a safety with 6:17 in the third.

After taking over at the PNG 42 after a nice return on the ensuing kickoff, the Bears went 42 yards in eight plays to take their first lead.

Jayvon Thomas and Green each got loose on 10-yard gains and Little capped it off with a three-yard keeper off right tackle to put the Bears up 24-17 with 2:05 in the third.

The Bears upped it to 31-17 when defensive back Malik Muhammad picked off Crippen at the Indians 41 and returned it all the way for the score with 1:03 in the third. Crippen went out on the play with a shoulder injury.

Oak Cliff put together a time-consuming nine-play, 48-yard drive and settled for a 22-yard Varela field goal with 4:18 remaining to up the margin to 17 points.

The Indians showed plenty of heart to wrap up an amazing season as they marched 83 yards in 17 plays to get more points on the board.

Adams shined on the drive. He had a nice 23-yard keeper and found Prosperie for a 30-yard pass. Adams tossed a three-yard touchdown pass to Brock Hebert with a minute left.

PNG went into the half with a 17-12 edge in a half that had several big plays on both sides.

The Indians came out of the gates with a flurry on the first series of the night when they took just three plays to go 70 yards to get on the scoreboard.

Nguyen broke loose for a nice 13-yard scamper to the PNG 47 and then, using perfect play-action, Crippen found receiver Landon Guarnere streaking wide-open down the left side. Crippen hit Guarnere in stride for a 53-yard touchdown bomb. Andres Sandoval drilled the extra-point as the Indians snagged a 7-0 lead with 10:52 in the first quarter.

The Bears responded on the next series, marching 72 yards in 10 plays until the PNG defense rose up near their own goal line.

The big Oak Cliff play came when Little spotted receiver Jamyri Cauley down the left sideline. Cauley made a great catch and dragged a PNG defender all the way to the Indian 5 for a 45-yard completion.

However, the Indians defense stood firm, stuffing the Bears on three straight rushing attempts and Oak Cliff had to settle for a 20-yard field goal by Varela with 4:59 in the first quarter to make it 7-3.

After pinning the Bears deep in Oak Cliff territory, the Indians took over at the Bear 43.

The Indians collected a pair of first downs and a 17-yard strike from Crippen to Prosperie got the ball to the Bear 17 on a third-and-8 play. The Bears defense stiffened though, and the Indians settled for a Sandoval 39-yard field goal to go up 10-3 with 9:12 left in the half.

Oak Cliff got on the board after pushing the Indians back deep. A nice Bears punt forced the Indians to start from their own 4. On third down from the 7, Oak Cliff defensive end Billy Walton sacked Crippen in the end zone for a safety, trimming it to 10-5 with 5:18 in the half.

The Indian offensive line opened up a big hole for Nguyen on the Indians’ next series. Nguyen, who had 110 yards on 10 carries in the first half, was able to zip through the “gut” of the Bears defense with a 59-yard jaunt all the way down to the Oak Cliff 3. Adams capped it on the next play, going off left tackle for a three-yard touchdown dart, pushing the Indians up by 12 at 17-5 with 3:32 in the half.

The Bears responded though, navigating 68 yards in eight plays to draw closer. Little had a critical 29-yard pass to receiver Corinthean Coleman on a third-and-18 play that got to the Indian 34.

Oak Cliff received the benefit of a pass interference call on the Indians and eventually set up at the PN-G 15. On the next play, Little hung one up to receiver Trey Jackson along the right side of the end zone and Jackson made a nice leaping catch for a 15-yard score as the Bears pulled to within 17-12 with 0:24 in the half.

Oak Cliff had 186 yards in the first half while the Indians had 179.

Little completed 7-of-13 passes for 153 yards for the Bears. The Indians stonewalled the Oak Cliff running game though, limiting them to 33 yards on 17 carries.

The Indians had 109 yards on 16 carries with Nguyen going for 110 of it. Crippen was 2-of-5 for 70 yards. The Bears were credited for two sacks that caused the Indians to lose 14 yards on them, including the safety.

Oak Cliff had seven penalties for 49 yards in the half while the Indians had just one for 15 yards. The Bears finished the night with 12 flags for 89 yard and the Indians had four for 35 yards.