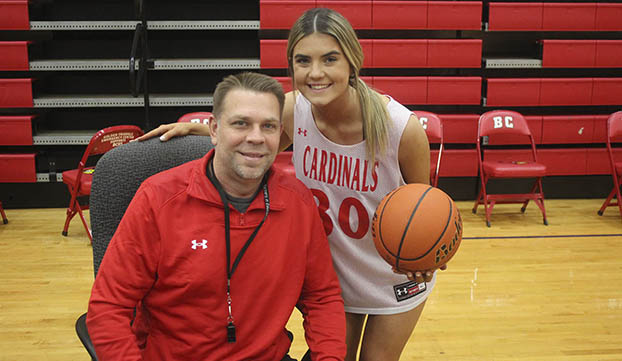 BRIDGE CITY – When Larry Sterling came back to Bridge City in the summer, he knew he was looking at somewhat of a rebuilding project with the Lady Cardinals.

After a tough 6-29 campaign last season, Sterling has a young basketball squad playing well as they stand at 10-9 thus far.

Sterling, who was the boys basketball coach at Bridge City from 2015-2018, is trying and get the Lady Cardinals on the winning track.

“I’m thrilled to be back, and at times it feels like I’ve never left,” said Sterling. “I remember so many of the faces around here, from the kids, who so many of them were in junior high when I left, to all of the coaches. I had a great time coaching the boys here, and now I’m so happy to get a chance to work with the girls.”

Sterling feels the future is bright for the program and looks for the group he has to pave the way.

“I know there is talent here, I saw that firsthand when I was here before,” said Sterling. “You have to start somewhere, and that begins with the fundamentals of the game. I’m more interested in getting the kids to buy in and have fun in what they are doing.”

Sterling has five freshmen and three sophomores on the varsity team and three important seniors in JoLee McGuire, Morgan Louvier and Julia Johnson.

“We’re so young, but we have some kids that love the game,” said Sterling. “Our freshmen class is really strong. You really can build things up at the lower levels. That is where it all starts. Our junior high program is really good. It’s all about getting in great practices and playing the game throughout the year, whether it is summer ball or select ball. If kids do that, there is so much potential down the road.”

Sterling is proud of the way the Lady Cardinals have progressed.

“We went 5-1 at the Nederland Tournament, and I think the girls realized then that they could compete,” said Sterling. “We really feel we can play well the rest of district play. We had tough losses early against Jasper and WO-S, where it was tight at the half. We struggled some in the second half. We’re working on that. We’ve got a tournament in Buna right after Christmas and that will really help us prepare for the district stretch.”

McGuire is one of the leaders Sterling has turned to. McGuire is the player that sort of sets the tone, especially on the defensive end.

“Defense is definitely my strong suit,” said McGuire. “That’s the part of the game I love the most. I love to be aggressive. That’s why basketball is so fun for me. I like taking on the challenge of facing tough opponents and mixing it up with them in the paint. I love fighting for rebounds or diving, trying to get steals. Anything I can do to help my team, I’ll do it.”

“I really expected JoLee to be one of our leaders, and she’s stepped up in a big way,” said Sterling. “She’s our defensive stopper and she’s physical. That makes the other girls want to get stronger. Morgan (Louvier) is our scorer, and Julia (Johnson) handles the ball well for us. It’s a good trio to help lead our younger kids.”

McGuire has loved the way the Lady Cardinals have shown so much progress.

“Last year, we would get down and would kinda fade away, but with Coach Sterling, we have a lot of fight,” said McGuire. “He’s brought in a new philosophy with a new offense and defense. He can be tough and stern when he has too, but he also makes sure we have fun.”

McGuire definitely saw the change at the Nederland Tournament, when Bridge City went 5-1.

“We won one game there last year, which says a whole lot,” said McGuire. “We’re young for sure, but I just love the talent my younger teammates have. I love working with them. They know they can always come to me with questions and in games they know I always have their backs. I’m really looking forward to see where we can go the rest of the season.”