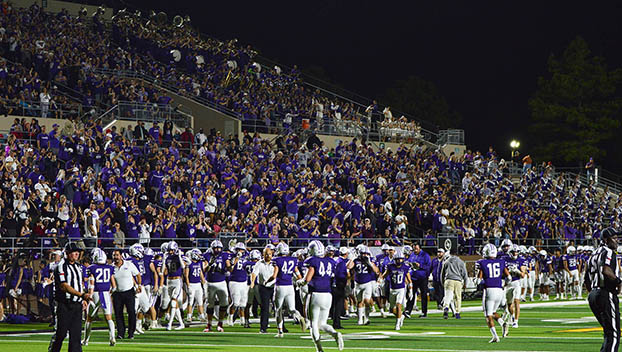 Over the years, I’ve been involved in and covered some of the best football teams our area has ever produced.

After all, I’ve covered the West Orange-Stark Mustangs in five Class 4A State Championship Games and have seen them play in three others back in my “younger” days. I saw the Mustangs faithful and a whole lot of Orange County fans bring a huge contingent to AT&T Stadium in Arlington three times and NRG Stadium in Houston once in two state-of-the-art stadiums.

I’ve witnessed the Newton Eagles bring home a couple state titles and saw Beaumont West Brook in 2018 when they brought a huge abundance of fans to State.

I must say, I’ve loved and have got to meet so many fans during all of my playoff ventures with the Mustangs, Bears, Cardinals, Bobcats and Pirates. They have all brought plenty of noise, and they’ve cheered on their kiddos with amazing grace and tremendous adoration.

However, nothing quite matches the strength in numbers and the school pride that the Port Neches-Groves Indians have held throughout the years.

Many of us who have grown up in Orange County have basically thought Indian Nation was a cult, but for the most part, in a good way.

I can remember as a youngster in 1977 when the Indians took on the Plano Wildcats in the state title game, PNG’s last State Champion team. My Dad and I were watching the highlights of the game but were even more wowed by the crowd that was at the old Texas Stadium, home of Roger Staubach, Tom Landry and America’s Team.

I got to see the Indians play Stephenville first-hand in the 1999 State Championship game against Stephenville in the glorious Houston Astrodome. The Indians dropped a tough battle in that one, but that game drew an all-time Astrodome high school record crowd as 39,000 fans attended.

It could have been better if Stephenville had a better following, after all, 34,000 of the fans hailed from PNG. The loudness at times was nearly deafening. Many of us know about those loud and obnoxious cowbells that Stephenville has always brought to games. Well, that day, Cherokee drowned them out, and that’s saying a lot.

I’m not forgetting you, Mustangs fans. PNG lost two games that year and we all know who the other loss was to.

I’m almost willing to say that the PNG fan loyalty in football is second to none. I would probably even argue with that with anyone nationally.

I have not heard verification yet on the total crowd count at Katy’s Legacy Stadium in the Indians’ 42-14 throttling of Liberty Hill in the State Semifinals last Friday, but if I were guessing, PNG had to bring around 20,000. PNG had its side full and then many Indians fans were seated cordially on the Liberty Hill side, as well.

The celebration shots and crowd shots were great, but the ones I’ve enjoyed the most were some pictures fans posted on Facebook with their visit to Buc-ees on their way back home.

Poor Buc-ees probably had no idea what was about to hit them, but with all of the purple-cladded folks that hit their establishment, they had to be tired but laughing all the way to the bank.

The Cherokee fight song rubs people sometimes in a bad way but mostly in a positive one.

People get tired of hearing that song over and over. I’m fine with it for the most part, being a Florida State fan all of these years.

To this day, I still think about legendary Texas Hall of Fame coach Dan Ray Hooks every time I hear Cherokee. Coach Hooks and his WO-S Mustangs took care of the Indians 75 percent of the times they played each other.

In 1996, the Mustangs went over to PNG and just got hammered by the Indians. Me, still being a fairly young reporter, asked Dan Ray the dumb question, “What happened coach?”

With editing a few choice words, which is what I had to do at times with Coach Hooks, he came back basically saying, “What in the hell do you think happened Van? They played Cherokee 20 times. Didn’t you watch the game, son?”

Of course, Dan and I met the following Monday and he was back to his funny self. I don’t think he ever lost again to the Indians.

So here is hoping Cherokee is played 20-plus times come Friday night. That would likely mean a sure win.