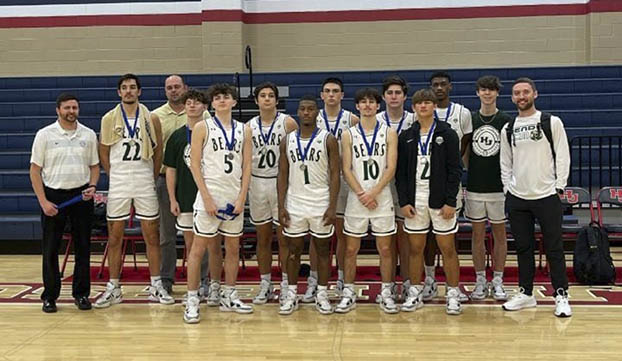 The LC-M Bears had a big run at the Hardin-Jefferson Marathon to take home a second-place trophy. (Photo courtesy LC-M Basketball)

LITTLE CYPRESS – After a blistering performance at the Hardin-Jefferson Marathon last weekend and a strong overall start to the season, the Little Cypress-Mauriceville Bears find themselves in rare air – ranked in the Texas Association of Basketball Coaches Class 4A state poll at No. 16.

“It’s been a minute,” said LC-M coach Brad Jeffcoat. “Four or five years ago we were ranked in the preseason. We were without a few players early that season due to the football playoffs and we dropped a couple games early and we had never been in it since, until now.”

The Bears (13-4) are coming off a superb second-place finish at the H-J Tournament.

“Those were two nice wins against quality opponents,” said Jeffcoat. “We’ve been down to the wire with H-J both times, coming down to the last couple possessions and they have been battles. We’ll play each other again at our tournament at the end of the year. Guess you can call that the rubber match.”

The Bears ended up falling to Class 5A state power Lufkin in the Championship Game.

“We held our own with those guys for awhile,” said Jeffcoat. “They are ranked No. 9 in Class 5A for a reason. They reached their Regional Tournament last year and had four starters back. I’m really pleased with the way the kids are playing.”

The Bears have been powered by the high-octane scoring from senior Ben Elliott and junior Alantheon Winn.

Seniors Da’Marion Morris and Noah Fuller have been outstanding as well, getting involved in the scoring and more importantly, dishing the ball off to open teammates and playing tenacious defense.

The Bears will play in the Louisiana Showcase against Lake Charles Barbe at McNeese State University next Tuesday and welcome in long-time Texas powerhouse Houston Yates to Bear Country next Wednesday.

The Bears host the LC-M International Paper Classic at Hargrove Gym Dec. 29-30 before diving into District 19-4A play at home Jan. 3 against Bridge City.

As usual this time of year, there are always things to concentrate on.

“What I’m most proud of thus far is the way we’ve played on the defensive end,” said Jeffcoat. “We’ve improved so much in that area, and the kids have put forth a lot of effort. We’ve been holding a lot of teams to in the 40s. When you do that, it raises your chances to win. The area we’re looking to improve on the most is our transition offense. I think we’ve left quite a few points on the floor. We really want to get our break going more. We’ve got several games before district starts that will allow us to work on it.”

Silsbee is ranked No. 3 in Class 4A, while Hardin-Jefferson is No. 17 and Hamshire-Fannett No. 18.

In Class 3A, District 22-3A rivals East Chambers are both ranked. East Chambers chimes in at No. 16, while Orangefield is No. 17.

Beaumont United is ranked No. 3 in Class 6A.