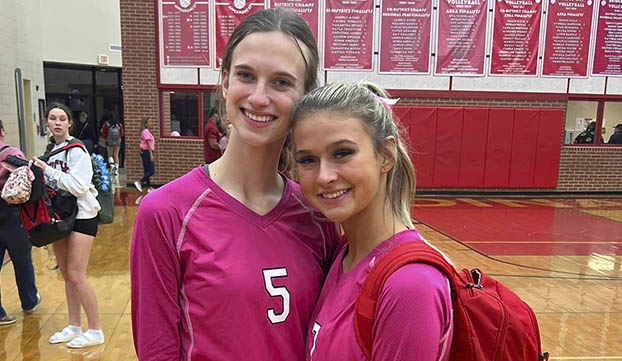 BRIDGE CITY – The honors continue to pour in for the Bridge City Lady Cardinals volleyball team after a dominating season.

Doiron and Carter were instrumental in leading the Lady Cardinals to a 30-12 overall mark and 12-0 perfect mark in district play for the second consecutive season. Both have been a part of three straight district championship teams.

“I couldn’t be more happier for those two,” said Lady Cardinal head coach Savanah DeLuna. “It’s a great honor for Taryn, especially with her being a senior and all. She’s such a tremendous leader and is going to be missed for sure. Demi, she’s been so amazing, and to have her back for her senior year next year is so awesome. We’ve got a good young team coming back and Demi is going to be the main leader of the pack. I know she can do it. She’s so smart and is ranked in the top three in her class. You couldn’t ask for two better kids to represent Bridge City.”

Doiron, the lone senior on varsity this season, racked up an amazing 535 assists last season to go along with 241 kills, 258 digs and 102 aces. She was named the Most Valuable Player on the 2022 All-Orange Leader Volleyball Team and was tabbed Top Setter of the Year on the All-District 19-4A Team.

Carter, who is the Offensive Player of the Year on the All-Leader Team and Most Valuable Player on the All-District 19-4A Team, piled up 453 kills, 193 digs, 89 aces and 70 blocks.

“That really is a great honor, but my teammates deserve a lot of credit, and I’ve had some great ones,” said Doiron. “To be able to set up some of the players I’ve been able to, I’ve been very fortunate.”

Doiron was thrilled to have a tremendous last season with her teammates.

“It has been so awesome, and I will always cherish the great times I’ve had with all of my teammates,” said Doiron. “We always have high goals here and I set high goals for myself, too.”

Doiron and Carter rose up to become tremendous leaders for the Lady Cardinals, who sported five freshman and four sophomores.

“I knew we were going to be young this year, but I’ve worked with those girls when they were younger. I knew the talent was there,” said Doiron. “You could just see them improve week-to-week and get more confident every time they stepped out on the court. It was fun to watch them, and I hope I was a help to all of them.”

“We have so much young talent, and our freshmen are awesome,” said Carter. “I do all I can to give them advice and tips because I remember how tough it was to be a freshmen. They just keep getting better, and you can see their confidence building.”

“Taryn is unbelievable in setting me up. We are always communicating, and she always knows where I’m at and where I will be coming from,” said Carter. “I have so much trust in her in getting the perfect set. She’s so magical in what she does.”

Carter is proud to have worked to improve her overall game, but she still has one favorite thing.

“There is nothing quite like getting an awesome kill, one that I can really get a hold of,” said Carter. “What I like the most is that it ignites the crowd and gets everyone on the team fired up.”