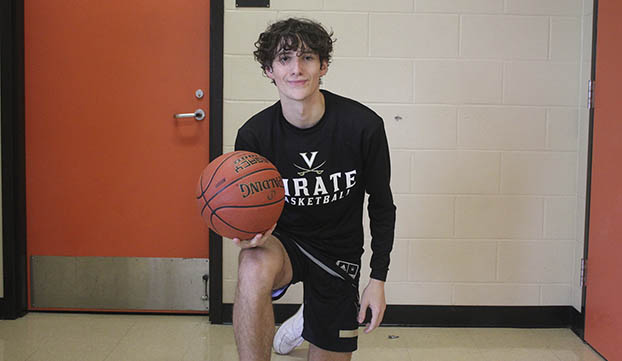 Vidor senior Xander Lindsey has been a steady force for the much-improved Pirates this season. (Van Wade/Orange Leader)

VIDOR — Anyone who watches the Vidor Pirates hit the court can quickly spot a silky smooth forward.

He’s the one with excellent range who is not afraid to mix it up inside on drives.

“When I got the job, I could tell immediately that Xander was going to be one of our leaders,” said Hoyt. “His love of the game is something special to watch. He’s so detailed in everything that he does, and the other players feed off of that.”

Lindsey, along with guard Bryce Loftin, have been the Pirates’ top scorers this season, one that is going rather well for Lindsey thus far in his last campaign.

The Pirates stand at 9-5, which is one more win then they had during the entire 2021-2022 season, in which they finished with 22 total defeats and 1-11 district record. They are coming off a second-place finish at the Orangefield Tournament.

“We’re really starting to come together, and that has a lot to do with Coach Hoyt. He has really come in and energized us,” said Lindsey. “You can see improvements already throughout the season, and we’re looking to be ready come district. Last year was rough, but this year I really like our chances.”

Lindsey has been firing it up in gyms across the area ever since he was 6 years old.

“I fell in love with the game when I was in Little Dribblers,” explained Lindsey. “I’ve just always enjoyed having a basketball game in my hands. I am always looking to play the game in school and away from school and get with anyone that wants to play. My Dad was a coach, and I love watching the game with him. We’ve always been big Houston Rockets fans.”

Lindsey is known for his great form on three-point shots.

“I really started developing a good three-point shot when I was in junior high,” said Lindsey. “To be a good three-point shooter, it’s all about being in a good state of mind and knowing that the ball is going to in. It’s all about getting in as many reps as you can. I consider myself a gym rat. There is nothing quite like hitting several in a row in a game. It gets my juices flowing, and it helps my team as far as them having confidence in me.”

Lindsey isn’t afraid to mix it up inside, driving the lane, playing defense and hitting the boards.

“I just don’t want to be known as a shooter,” said Lindsey. “I’ve worked hard on my drive game and getting more physical as far as crashing the boards. I’ve really worked hard to get better on the defensive end. I think that’s the area we’ve improved the most. We’re not giving up those easy baskets. We’re just overall tougher this year.”

The Pirates have a formidable lineup.

“Bryce (Loftin) is a really good shooter, can really drive the ball and get fouled and he hits a lot of free-throws,” said Lindsey. “Brayden Root is a beast inside on the boards and can score from inside-out. Camden Young is just a workhorse that can do so many things, and Jose Guerrero-Evans can really hit some big shots. We all work really well together.”

The Kountze game earlier this season is the game that has stood out for Lindsey.

“I was hot that night, going for 33 and my teammates kept feeding me the ball and everything was going in,” said Lindsey. “I was totally in the zone. That’s what is great about us, when we know one of us is hot, we keep feeding him.”

Now it’s all about District 19-4A play. The Pirates host West Orange-Stark to open district Friday.

Lindsey will look to lead the Pirates into the postseason fray his final year before pursuing a life-long dream.

“I’m a basketball junkie, so I’ve always aspired to play at the college level,” said Lindsey. “I really hope someone gives me a chance because I will give them all I’ve got.”