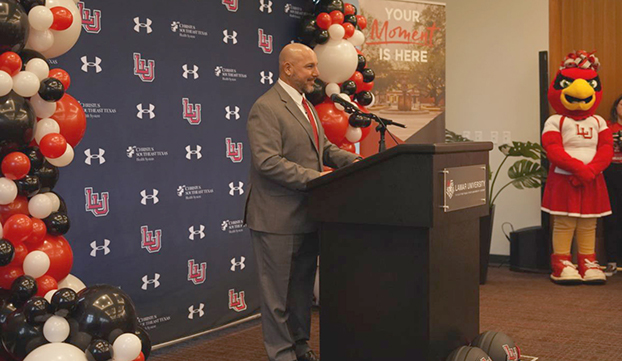 “We could not be more excited to have Pete as our next head coach,” said O’Malley. “After a thorough national search, Pete’s name rose to the top of a very impressive list of candidates.

“In addition to an impressive résumé, Pete has created a strong reputation centered around building programs into championship contenders at both the NCAA Division II and FCS levels. He has guided multiple teams to conference titles and postseason appearances. I believe he is the perfect fit for Lamar University at this time, and I look forward to the future of the program under his direction,” added O’Malley.

Rossomando becomes the program’s 11th head coach since LU transitioned into a four-year program (in 1951), and just the fourth leader since bringing back the program prior to the 2010 season.

“We are committed to the success of the Lamar University football program,” said University President Dr. Jaime Taylor. “I understand the deep connection this program has with the entire Golden Triangle. I join Jeff (O’Malley) and his excitement surrounding the future under Coach Rossomando’s guidance. He brings an amazing track record of success with him to Beaumont. I look forward to him coming to Beaumont and becoming part the Cardinal family.”

Rossomando comes to the Golden Triangle from Charlotte where he spent the previous two seasons as the 49ers’ offensive line coach and was named interim head coach for the final four games of the 2022 season. Rossomando guided the 49ers to a 2-2 record to close out the year after opening the season with a 1-7 mark.

Prior to his arrival in Charlotte, Rossomando spent two seasons serving as offensive line coach at Rutgers (2019) and Vanderbilt (2020). Before his time in the Big 10 and Southeastern Conference, Rossomando was named head coach at Central Connecticut State. During his time with the Blue Devils, he led the program to its first NCAA FCS Playoff appearance in program history. CCSU posted an 8-4 overall record in 2017 and won the Northeast Conference title with a perfect 6-0 mark. His efforts on the sideline drew praise from national voters as he was named a finalist for the Eddie Robinson National Coach of the Year award.

“First, I would like to thank University President Dr. Jaime Taylor and Director of Athletics Jeff O’Malley for this opportunity,” said Rossomando. “After meeting with Dr. Taylor and Jeff, I could tell they had a strong commitment toward football, and the facilities at Lamar blew me away. The opportunity to recruit and coach in the state of Texas is very exciting.

“Our fans can expect a team that will be exciting on offense, play great special teams and really fly to the ball on defense. I’m ecstatic about getting to Beaumont engaging our fans and the community and being the Cardinals’ next head coach,” added Rossomando.

Rossomando made the head coaching jump to the NCAA FCS level after spending six seasons at the University of New Haven where he built the program from the ground up. He spent his first season at UNH putting together a staff and recruiting players to take the field for the 2009 campaign. Over the course of the next five seasons, New Haven posted a 42-13 (.737) overall record, including a 33-8 (.805) conference mark. During his final four seasons on campus, Rossomando guided UNH to two eight-win seasons, a 10-win campaign and an 11-win season. The Chargers won two conference titles and advanced to the NCAA Division II playoffs in 2011 and 2012.

A four-time conference coach of the year selection, and the 2012 Liberty Mutual National Division II Coach of the Year, Rossomando has been part of seven conference championship teams as either a head coach or an assistant, as well as serving on staff for the 2002 ECAC Bowl Championship squad and the 1997 NCAA National runner-up team during his first stint at New Haven.