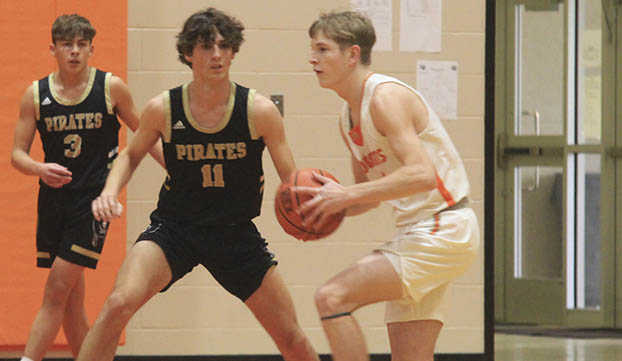 ORANGEFIELD – Protecting their home court, the Orangefield Bobcats got past the Vidor Pirates 61-56 in the Championship Game of the Bobcat Tournament Saturday at Bobcat Gym.

Bobcat guard and Tournament MVP Pete Ragusa, who had an amazing tournament, finished with 30 points, 17 coming in the first half. All-Tournament pick Zane Wrinkle pumped in 14 points for the Bobcats while All-Tournament selection Brayden Parker had 10.

The Bobcats knocked off Jasper in the semifinals 63-50.

The Pirates knocked off Bridge City 72-46 in the other semifinal.

Loftin tallied 26 points for the Pirates while Lindsey contributed 18 and Root 10.

The Cardinals fell to Jasper 59-56 in the third-place game. Linder muscled his way inside for 26 points for the Cardinals. Aaden Bush added 10 points for Bridge City while Guiterrez had nine points by burying three treys.

The Bobcats strolled past Beaumont Legacy in their game Friday.

SOUR LAKE – The Little Cypress-Mauriceville Bears advanced all the way to the title game of the Hardin-Jefferson Mararhon Saturday before falling to 6A power Lufkin 45-33 in the Championship Game.

The Bears tripped up the host Hardin-Jefferson Hawks 55-52 in double overtime in the semifinals.

On Friday, the Bears defeated Buna 52-48 and dropped a hard-fought 54-46 decision to Lufkin. Against Lufkin, Ben Elliott led the way with 13 points. Alantheon Winn had 12 points while Ty Blackmon had nine points and Da’Marion Morris added eight.

ORANGEFIELD – The Orangefield Lady Bobcats evened their District 22-3A record to 1-1 by hammering the Kirbyville Lady Wildcats 56-22 at Bobcat Gym.

Greenlea Oldham had a double-double for the Lady Bobcats, finishing with 10 points and 10 rebounds.