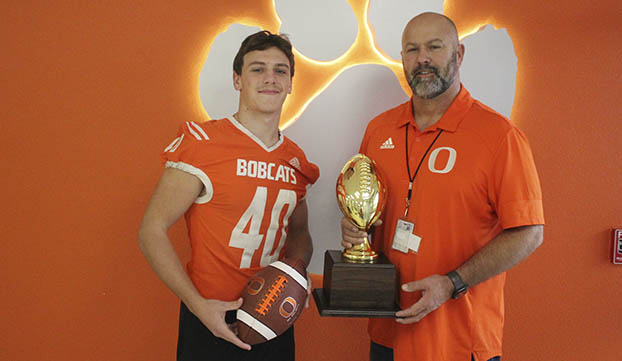 Orangefield’s Cameron Dischler is the 2022 All-Leader Football Team Most Valuable Player after strolling to 2,441 yards rushing and 28 touchdowns for long-time Bobcats coach Josh Smalley, who was named the Coach of the Year. (Van Wade/Orange Leader)

ORANGEFIELD – It will be a season that the Orangefield football faithful will remember for a long, long time.

The Bobcats stormed to their first outright district championship since 1988, and every player played significant roles in producing a perfect 6-0 district mark and trip to the Class 3A Region III Area Round of the playoffs.

However, no player in Orange County meant more to his squad than the player who donned No. 40 for the Bobcats.

Senior running back Cameron Dischler lifted the Bobcats in so many ways, especially with his legs, as opposing defenses simply had no answer for him all season.

Dischler sprinted and also bruised his way to a whopping 2,441 yards and 28 touchdowns on 247 carries, averaging nearly 10 yards a carry. He also found time to play superbly at defensive back when needed, was a standout on the special teams and tossed two touchdowns for Bobcats coach Josh Smalley. 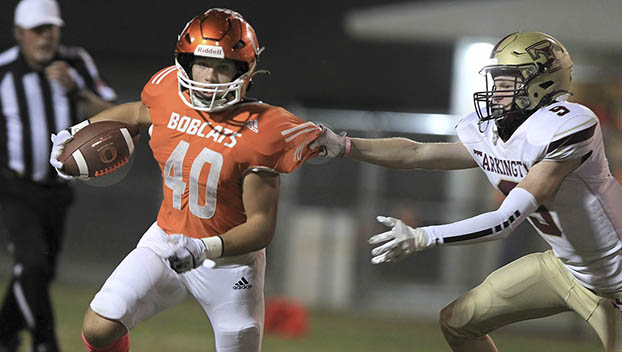 With his efforts, Dischler is the 2022 Most Valuable Player on the All-Orange Leader Football Team.

“I’m proud to get the honor, but it definitely wouldn’t have been possible without a great group of teammates and a great coaching staff,” said Dischler. “To win as a team, you have to play as a team. We knew we had the guys that would do that, going way back to the offseason. We were a team on a mission, and that started by working hard in practices and hitting the weight room together.”

When the Bobcats moved down to Class 3A again, that really pushed the Bobcats’ buttons.

“We proved we could always compete in 4A, so when we dropped down, we definitely set some goals,” said Dischler. “We knew everybody was going to play hard against us in our new district, and that made us work harder because we knew we were going to have to go out and prove that we were the best. To accomplish it for the first time since 1988 is so special. It is important to say down the road that we were the team that won it outright for the first time in almost 35 years.”

Dischler had more than 1,300 yards on the ground as a junior, but was ready to up the ante as a senior.

One concern early was a young Bobcats offensive line that didn’t return a single starter from last year’s 7-4 Class 4A playoff unit.

“Those guys, what more can you say? They did an incredible job,” expressed Dischler. “In our style of offense, it’s those big guys up front that make it go. Sure, we knew we were young in the line when the season started, but we kept on pumping them up and showing confidence in them. Offensive linemen, you know, don’t get a lot of credit, but those guys have gotten better each week. They are just going to keep getting better, and I can’t express more of how proud I am of them.” 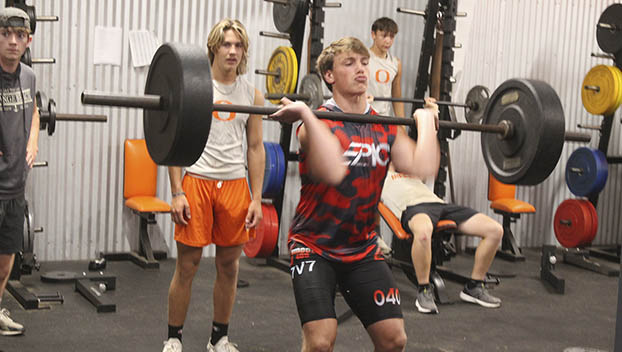 Smalley felt the line was a huge key.

“Those kids really stepped up this year and you know who the first player that usually greeted them after a big game – Cameron Dischler,” said Smalley. “That’s just the type of kid he is. He’s never been a rah-rah type of kid. He leads by example, but he loves his teammates and was always pushing them and praising them all at the same time.”

Dischler fits into rare company for Coach Smalley, who is the 2022 All-Orange Leader Team Coach of the Year.

“I’ve been in coaching for 25 years now and Cameron might be the best one I’ve ever coached. That says a lot because I’ve seen some good ones over the years,” said Smalley. “He may not be the fastest or the strongest I’ve seen, but he has a heart and determination like no other. He finished with over 4,000 rushing yards to become the school’s all-time leading rusher, and the best thing about it is that he’s so humble. He’ll be the first one to say it was all about his teammates and coaches getting him here. That’s just his personality.”

Dischler is getting looks from several colleges but right now he is concentrating on playing basketball with his Bobcats teammates and looks forward to wrapping up a great run at Orangefield High.

“To me, it has never been so much about stats and touchdowns, it’s been about having fun with my teammates and coaches and winning games,” said Dischler. “Our small little community got wrapped up in us this year, and it was so awesome. The support we have here in everything we do has always been great. Every time we would go in K-Dans to get something to eat, we were treated like celebrities. Responses like that, that is what has always made Orangefield special.”